Balance of payments figures from the Central Bank of Russia (CBR) show Russian earnings on exports of goods and services rose by over 20 % y-o-y in 2Q17. The good performance resembled the strong rebound in the first quarter, but both quarters measure their on-year growth against very low levels in the first part of last year. Earnings were up for exports of both energy and other goods, which also in the second quarter was driven to a significant degree by increases in export prices. Exports earnings on services also continued to rise.

Russian spending on imports of goods and services was up about 25 % y-o-y in both the first and second quarters. Spending on goods imports was up about 30 % y-o-y. In euro terms, spending on imports was about the same as in 2011 for both total imports and goods imports. Service imports increased more slowly, but within the category, imports of travel services (i.e. purchases of goods and services by Russian travellers abroad) were up about 30 %.

Following a common pattern, the Russian goods trade balance in the second quarter was strongly in surplus and the services balance was in deficit. The rest of the current account, however, was slightly more in deficit than usual. Much of the higher deficit reflected outward dividend and interest payments on investments made from abroad in Russia’s corporate sector. The current account balance overall was slightly in the red. 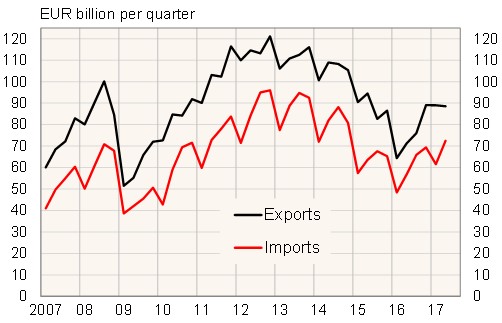