China's central bank and Hong Kong's monetary authority announced plans in May to give foreign investors the opportunity to trade bonds in mainland China's interbank market via Hong Kong. Initially, investment will be permitted without quotas only from the Hong Kong side. Later, authorities will consider mainland Chinese's chance to invest in Hong Kong's bond market. The decision initially allow only one-way investment reflects the current market situation, where Chinese officials worry about capital flight. While there is no detailed information available on how the programme will be implemented, premier Li Keqiang said already in March that he expected trading to begin this year.

Due to many uncertainty factors, the programme is unlikely to attract major foreign investor interest in the short term. Given that China's national credit rating system diverges from international practice, it is difficult to objectively appraise the financial health of most Chinese firms. An IMF study last year found that over 90 % of bonds traded in China had received excellent ratings (AA or AAA). In the United States similar high ratings were granted to less than 2 % of firms. This reflects partly the fact that most issuers are linked to the government and enjoy implicit guarantees.

China's bond market has grown rapidly to become the third largest in the world after the United States and Japan. At the end of March, the Chinese bond market had a nominal value of 66.34 trillion yuan (USD 9.6 trillion). Of that, 35 % was government issued bonds, 39 % financial sector bonds and 27 % for the rest of the corporate sector. Foreigners held just over 1 % of the bond market or about 830 billion yuan (USD 120 billion) worth of Chinese bonds. Moreover, most foreigners exclusively hold Chinese government bonds or bonds issued by Chinese state policy banks. Indeed, most foreign holders of Chinese bonds are central banks. At the end of last year, the value of yuan-denominated investments held by foreign central banks and reported to the IMF was USD 85 billion, most of which are typically invested in low-risk assets such as government bonds.

Rates of 1-year bonds on the interbank market 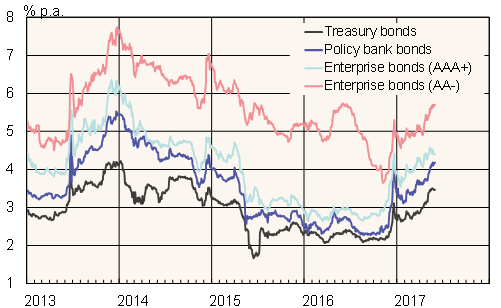