On August 26, the United States and China announced that they had reached agreement on a dispute that had threatened to force Chinese firms to depart US stock exchanges if they did not open their audits to US officials for inspection. As US officials have yet to conduct inspections of the audit documents, it remains unclear whether any Chinese firms will be delisted from US exchanges. Tensions between the two counties were recently exacerbated by the Taiwan visit of Nancy Pelosi, the US House of Representatives speaker, and new measures announced by the US intended to impede the development of China’s high-tech sector.

The accounting dispute was becoming an acute issue for Chinese firms listed in the US. The three-year deadline for audit compliance was approaching under a US law passed in 2020 mandating audit inspections for all listed firms (BOFIT Weekly 50/2020). Chinese officials continued to insist that the audit documents of Chinese firms are confidential and should be stored in China. The dispute on auditing rules has been the subject of talks going back decades. With agreement reached, US officials can this month travel to mainland China and Hong Kong to begin inspection of the audits of the listed firms. The firms have used 16 different accounting firms that are subject to the inspections. The inspections must be completed by November so that officials have time to write up their findings before next year’s deadline. It is still unclear whether the officials will be able to meet their deadlines.

Officials report that nearly 170 Chinese firms could face delisting from US exchanges. In August, five large Chinese state-owned enterprises (Chalco, China Life, PetroChina, Shanghai Petrochemical and Sinopec) announced that they were voluntarily leaving the New York Stock Exchange. As of last March, the main US stock exchanges (NYSE and NASDAQ) listed a total of 261 Chinese firms, with a combined market cap of $1.3 trillion. Some of these firms, however, use auditors outside China, where US officials can inspect their audits and therefore do not face a risk of having trading in their shares suspended. The audit disclosure disputes, technology export restrictions and heightened tensions between the two countries have depressed prices of Chinese shares listed on US exchanges.

The US has tightened its technology export restrictions for China in recent months. Citing national security concerns, the US added seven Chinese aerospace and semiconductor firms to its entity list in August. US firms are banned from doing business with firms on the list. Five other Chinese firms, which were put on the entity list already in July, were the first firms to be added on the basis of allegedly supporting Russia’s military. According to media reports, the export restrictions on microchips to China have been tightened to affect a broader share of high-tech chips.

In August, the US Congress passed a law to encourage domestic production of semiconductor chips and related research (CHIPS and Science Act). The broad financial package is hoped to attract new high-tech investment to the US. The act is also geared to reining in China’s development by requiring firms that benefit under the act to refrain from investing in advanced semiconductor production in China for the next ten years.

There are no signs that China-US trade frictions are easing. While US is conducting a review of the tariff hikes imposed by president Trump during 2018 and 2019, the tariffs remain in place. Policymakers in the US apparently discussed the possibility of lowering tariffs as a way to cool inflation, but media reports suggest that the plan was subsequently abandoned. China is also keeping its punitive tariffs on US products in place for the time being.

The index of Chinese firms listed on US exchanges (S&P/BNY Mellon) has underperformed both the US S&P 500 and China’s CSI 300 indexes. 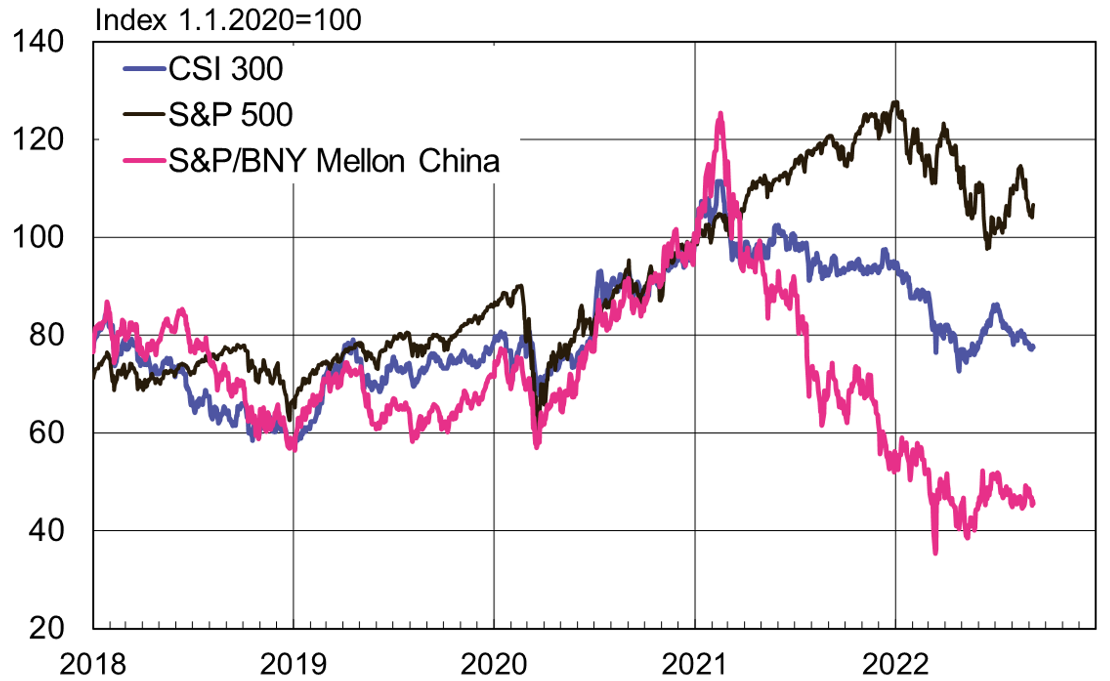