Budget revenues saw November spikes that lifted revenues significantly relative to November 2021. Gazprom paid one part of its large October-December extra tax on gas production and the government’s dividend income for the first half of the year from state-owned firms, especially Gazprom, rose very sharply. While total nominal revenues in September-November otherwise fell by 6 %, Gazprom’s production tax payment boosted them t0 an increase of 6 %.

Gazprom’s production tax payment contained the drop in revenues from oil & gas taxes, which otherwise fell by 26 % y-o-y in September-November. The price of Urals-blend crude oil in October-November was about 15 % lower than a year earlier and the ruble exchange rate, which is used to convert oil & gas taxes denominated in dollars, was up 15 % y-o-y. Revenues from export duties on natural gas plunged. Revenues from crude oil production, which accounted for 74 % of all oil & gas tax revenues in January-November, began to decline in October and November.

Other federal budget revenues rose fast in November, driven largely by dividend income and the timing of VAT payments by domestic producers. Import duties and taxes, similar to previous months, were down about 25 % y-o-y in November.

The rise in nominal federal budget spending slowed in November, but was still over 20 % y-o-y. Spending in January-November was up by nearly 22 % y-o-y, indicating that spending this year will likely overshoot the estimate presented in the autumn.

The federal budget deficit over the last 12 months remained in November at around 1 % of GDP. The surplus for January-November was under a half percent of GDP. Finance minister Anton Siluanov’s recent estimate that the deficit for all of 2022 would be about 2 % of GDP suggests that the government’s end-of-year spending will be at least as large as usual.

With the deficit in sight, the finance ministry has continued to sell debt securities to domestic banks at a brisk pace. Sales since mid-October equal over 2 % of GDP. For the time being, the CBR seems not to have dispensed plenty of liquidity to banks for that. Dipping into the National Wealth Fund to cover the budget deficit will probably remain quite limited. 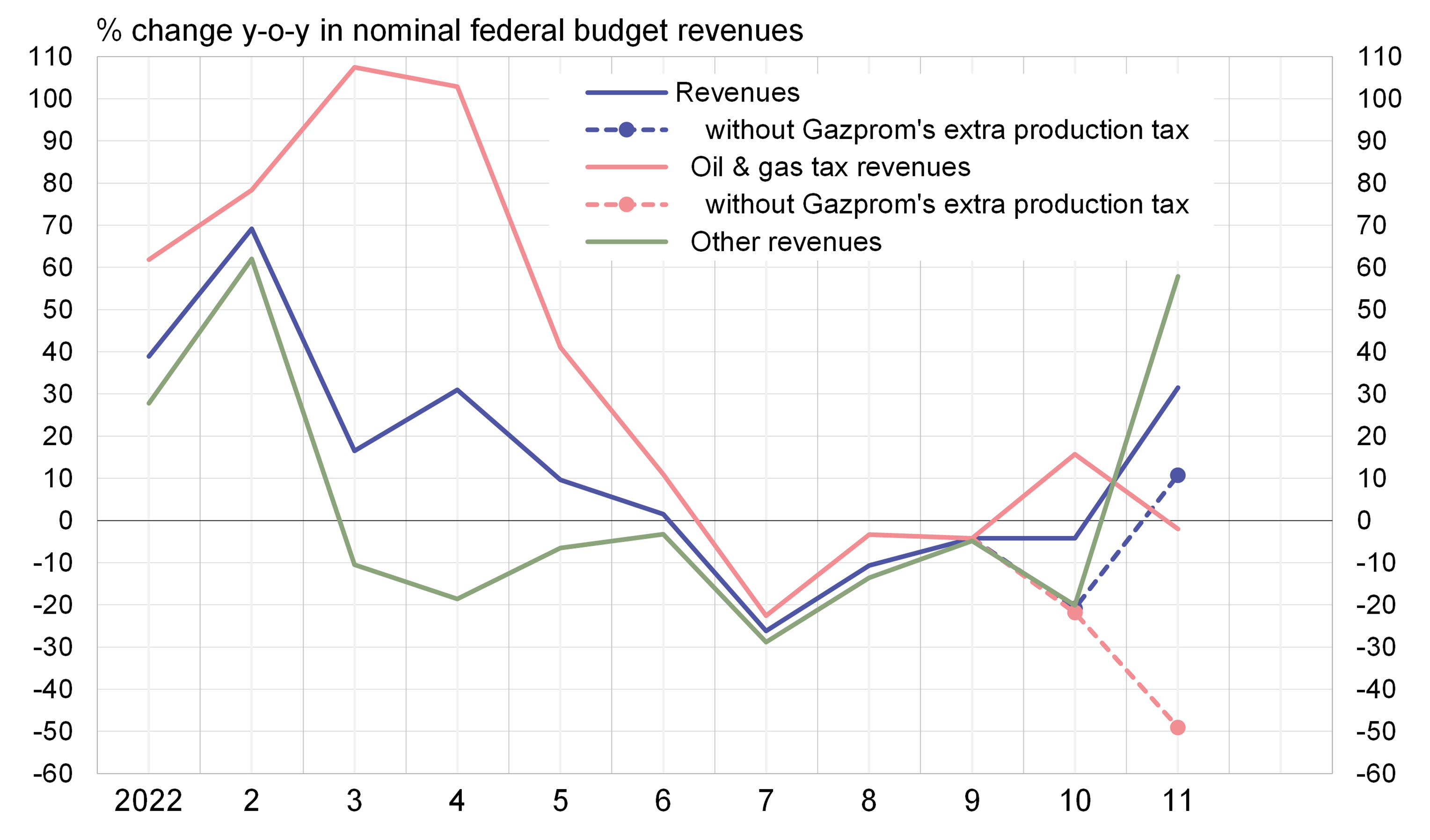