The International Federation of Robotics reports that over 500,000 new industrial robot units were installed worldwide last year, an all-time record. Over half of the units, nearly 270,000, were installed in China, which was 100,000 units more than in 2020. The next largest installations of new industrial robots last year were in Japan (47,000), the United States (35,000) and South Korea (31,000).

The biggest uptake of new industrial robots in China last year continued to be among manufacturers of electrical and electronic equipment and devices. These fields last year installed 88,000 new robots, a nearly 40 % increase from 2020. The largest units increase, however, was in the automobile industry. Carmakers last year installed 62,000 new robots, or double the amount they installed in 2019 and 2020. Robotization of the car industry is expected to continue strongly over the coming years as human labour costs continue to rise and car factories are repurposed for production of electrical vehicles (EVs). China expects EVs to account for over half of its car production by 2035. 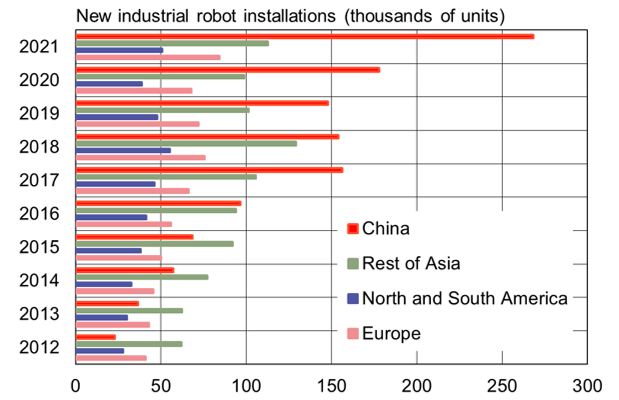