China’s declining retail sales, a proxy for consumption demand, highlight the impacts of the latest wave of covid infections and efforts to deal with the pandemic. According to the China National Bureau of Statistics (NBS), the nominal contraction in retail sales accelerated to near 6 % in November. Taking price changes into account, retail sales likely contracted by 7–8 % y-o-y in real terms. Growth in industrial output slowed sharply from 5 % y-o-y in October to just 2.2 % in November.

The volume of exports has shrunk on-year in every month since August, a trend that is seen to continue in November. The value of exports in November fell by 9 % in dollar terms, while the value of imports dwindled by 11 %. Exports to the United States fell by 25 % y-o-y. Measured in dollar terms, Russian trade continued to rise. The value of China’s exports to Russia in January-November was up by 13 % y-o-y (total exports up by 9 %) and the value of imports from Russia increased by 47 % y-o-y (total imports up by 2 %).

The acceleration in inflation is not a concern in China’s case. The rise in consumer prices slowed to around just 1.6 % p.a. in November, down from around 2 % in previous months. Core inflation, which excludes food and energy prices, remained steady at 0.6 %. The rise in food prices also slowed. Producer price inflation remain negative in November, matching October’s drop of 1.3 % p.a.

China’s troubled real estate sector saw no improvement in November. New construction starts were down by over 50 % y-o-y, and the volume of real estate sales (measured in floorspace) was down by a third from a year earlier. New construction starts in the January-November period were at their lowest level since 2009. Apartment prices are also falling, even if the official NBS figures show only a slight drop in prices (an average of about 3 % y-o-y).

All of China’s main monthly economic indicators declined in November 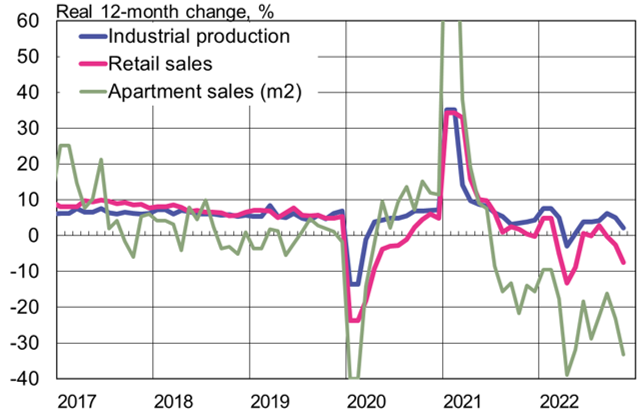