According to official figures, 747 million people were employed in China last year, of which 63 % had jobs in urban areas. The number of employed persons has fallen now for seven years in a row. The service sector last year provided already nearly half of all jobs. Even with a constantly declining share, the agriculture sector still accounted for over a fifth of employment last year. The remainder, nearly 30 %, are employed in construction or industrial sectors. This share has remained relatively stable in recent years.

Part of the reason that China’s unemployment rate has been so steady is that official unemployment figures do not include migrant workers who lose their jobs. Since the beginning of 2000s, China has published quarterly assessments of urban unemployment based on registration data. That figure held consistently around 4 % for many years. However, to be registered as an unemployed, a person must be under 60 and be officially domiciled in the same urban area as the employer in order to meet the criteria for receiving unemployment benefits. Thus, migrant workers domiciled elsewhere than the city where they live and work are not included in the unemployment figures.

Since 2017, the NBS has also been publishing a monthly survey-based estimate of urban unemployment. The survey extends to all urban workers, including migrant labourers and persons with a registered domicile in the city but who actually live in the countryside. However, even this statistic does not include migrant workers who have lost their jobs and left the city to return to their rural home district. It also omits the roughly 150 million self-employed Chinese who earn their living as sole proprietors.

Youth unemployment in cities recently peaked at a record 19.9 % last July. Younger cohorts have typically been employed in such fields as tutoring, technology and real estate. Earlier, about a quarter of persons employed as private tutors were under 25 and tech firms offered generous intern programmes for young people. Employment opportunities have dried up in these fields in recent years due to increased regulation and oversight. Officials are now scrambling to counteract the decrease in job opportunities by e.g. increasing the annual intake quota for civil servants as well as urging universities to raise the number of persons admitted to post-graduate programmes. 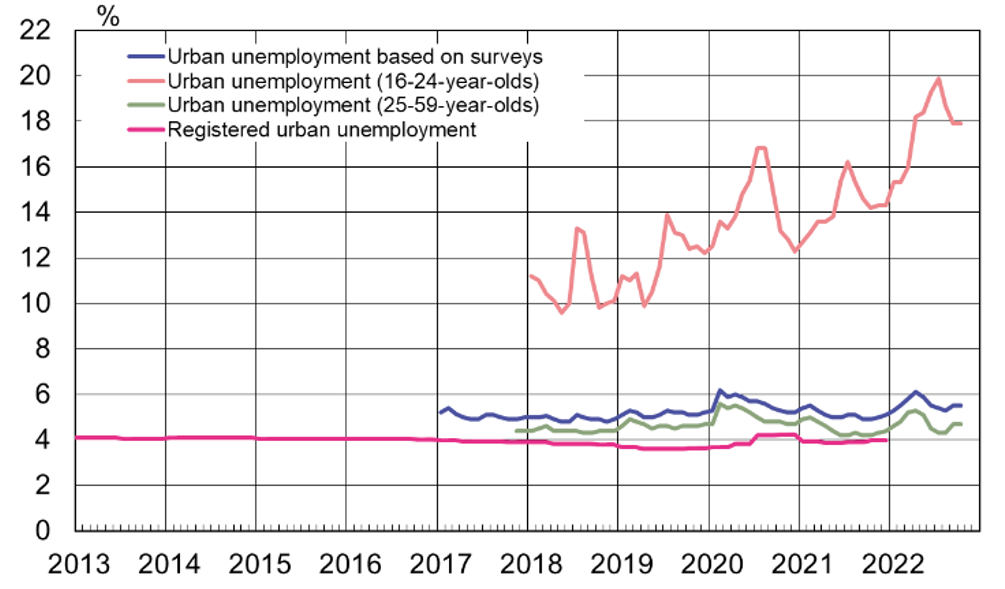