On September 15, Xi Jinping and Vladimir Putin conferred in the Uzbek city at a meeting of the eight-nation Shanghai Cooperation Organization (SCO). The topics discussed by the presidents included improving the logistics connections between the countries like construction of a new natural gas pipeline and ways to boost energy exports from Russia to China. Both parties expressed an interest for greater use of national currencies in their trade relations. Putin also sought closer scientific and technological cooperation. The high-level talks continued this week with a Russian security council secretary Nikolai Patrushev and China’s chief foreign policy diplomat Yang Jiechi getting together at the 17th strategic security summit in Nanping, a city in Fujian province in southeastern China.

The value of Chinese exports to Russia climbed in August to the same level as last December. Among largest export product categories, the value of plastic and chemical product exports has risen fastest (90–150 % y-o-y). The trend might reflect soaring prices for crude oil, a basic input for the plastics and other petrochemical products. Some of the large export categories such as clothing and machinery & equipment contracted in March-June, but bounced back in July-August. China releases only little information on goods exports volumes. The available data show that China has ceased all passenger car exports to Russia, while export volumes of other kind of vehicles also seem to have decreased.

China and Russia conduct an increased share of their bilateral trade in yuan. Overall, the yuan has seen a large increase in its use in Russia as access to Western currencies is restricted. The Society for Worldwide Interbank Financial Telecommunication (SWIFT) reports that nearly 4 % of yuan international payments traffic involved payments to or from Russia. Russia had the third largest share of international yuan payments after Hong Kong (over 70 %) and the UK (over 6 %). The growth in yuan payments has been very rapid. Prior to the invasion of Ukraine, Russia did not rank among the 15 largest yuan payment centres and its share of international payments in yuan was below 0.3 %. Russian firms, which have limited foreign financing options, are now showing a distinct interest in yuan-denominated financing. In August and September some Russian firms have issued yuan bonds on the Russian bond market. Firms include oil giant Rosneft, 15 billion yuan (2.2 billion euros); gold mining company Polyus, 4.6 billion yuan (0.7 billion euros); and aluminium giant Rusal, 4 billion yuan (0.6 billion euros). 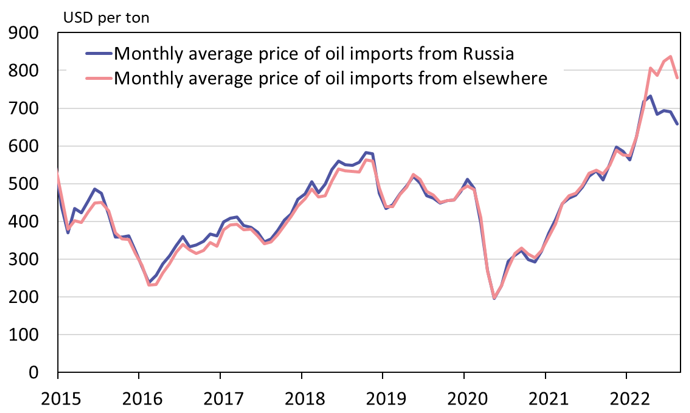