China’s preliminary balance-of-payments figures show a current account surplus of 80 billion dollars for the second quarter. China’s goods exports have boomed throughout most of the covid pandemic, while the services trade deficit has shrunk as most Chinese cannot travel abroad. The result is a robust trade surplus overall. The second-quarter goods trade surplus was 176 billion dollars, while the services deficit was 21 billion dollars. Correspondingly, the capital account deficit has risen in recent years as foreign investment in China has been more profitable than Chinese investment abroad. The Chinese also cut back on their foreign investment during the pandemic.

The financial account shows that foreign direct investment outflows from China exceeded FDI inflows in the first six months of this year. The second quarter FDI surplus (15 billion dollars) was smaller than in the first quarter (60 billion dollars). Although the current account and FDI entry were both positive, China’s foreign currency reserves fell by 19 billion dollars in the second quarter. Thus, it seems that capital has been flowing out of China either on record (through other investment categories in the financial account) or off record (net errors and omissions term). More detailed financial account information, along with revised current account items, will be released later. The figures for the Stock Connect and Bond Connect programmes also indicate that the net outflow of capital from China has persisted since February. The outflow of capital has picked up as the economy has been losing steam, and the PBoC’s monetary policy stance is diverging from the US in particular, which has recently seen large rate hikes from the Federal Reserve.

During 2020–2021, the value of China’s foreign currency and gold reserves increased rapidly as the economy bounced back from the Covid Recession in spring 2020 and strong export sector growth boosted the current account surplus. However, China’s reserve assets have shrunk this year. They were down by nearly 200 billion dollars from the start of the year, standing at about 3.05 trillion dollars at the end of August. 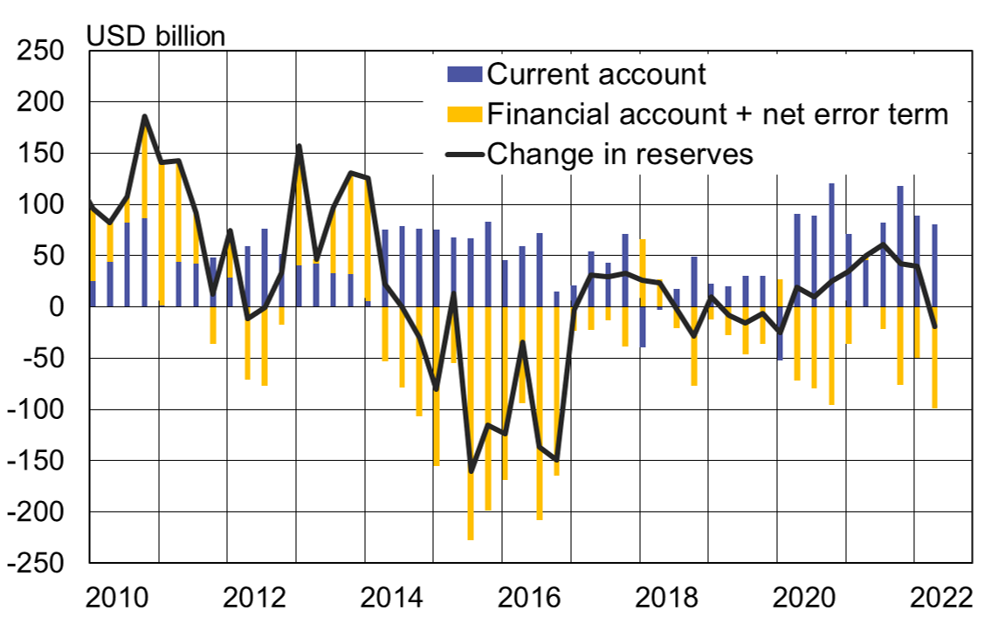