Following last week’s visit to Taiwan by Nancy Pelosi, Speaker of the United States House of Representatives, China announced measures targeting Taiwan and the US. China cut off bilateral climate talks with the US, as well as froze lines of regular military communication and suspended cooperation on legal issues such as the return of illegal immigrants. China also imposed import bans on certain Taiwanese foodstuffs and cut off sand exports to Taiwan. The measures are expected to have only a minor impact on Taiwanese economy. Foodstuffs account for a tiny part of Taiwan’s exports to China, and similarly, only a tiny fraction of the sand used in Taiwan (mostly in construction) is imported from mainland China.

The reunification of Taiwan with mainland China has been a long-term target for the Communist Party of China (CPC). On Wednesday (Aug. 10), Beijing published a new white paper on Taiwan. The last such statement was published in 2000. Although Beijing seeks a peaceful reuniting, the new statement no more contains promises that Beijing will not send military personnel to Taiwan or that Taiwan will enjoy broad autonomy after reintegration.

Even if the economic impacts from the increased tension are currently limited, further escalation of the situation could have serious implications for the global economy. Taiwanese firms, most notably TSMC, produce over 60 % of the world’s semiconductor microchips. Although some of the firms’ production is located elsewhere, a large share of global production of the most sophisticated semiconductor chips takes place in Taiwan. Because microchips are essential components for many products, production disruptions in Taiwan would directly and broadly affect international production chains. Western countries have sought to attract microchip production to secure supplies. TSMC has been investigating possibility of building a semiconductor microchip fabrication facility in Germany, and broke ground this summer on a new chip fab in Phoenix, Arizona. This week the US approved tens of billions of dollars in subsidies for the chipmaking industry. A condition for receiving subsidies is that companies do not increase their high-end chip production in China.
Taiwan has strong economic ties with mainland China. Nearly 30 % of

Taiwan’s goods exports last year went to mainland China. Microchips account for over 60 % of Taiwan’s exports. Hong Kong’s share of exports is also large (14 %), and part of that might be reexported to mainland China. Over 20 % of imported goods come from mainland China. In addition, Taiwanese companies have plenty of production facilities and other investments on the mainland. For example, Taiwan’s Foxconn is China’s largest private sector employer. 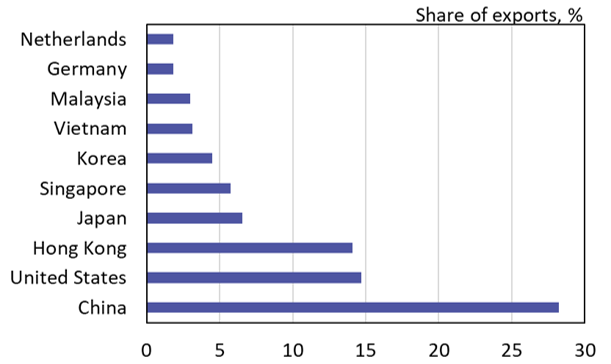