There are still large differences in the tracks of various sectors of the economy. After declining last spring, extractive industry output rose in June, which largely came from the April drop in oil output and its accelerated June recovery. Services supporting extractive industries enjoyed continuous considerable growth.

Despite a notable recovery in petroleum products, manufacturing output continued to decline in June, falling by 4.5 % y-o-y. Most of the on-year drop in manufacturing output also in June resulted from the collapse of domestic car production, but significant declines in recent months in metal production and fabrication of metal products, as well as the chemical industry, have also had tangible impacts.

Construction activity, which has diminished since April, slid down in June to the same level it had been a year earlier. The slide in goods transport became steeper in June, falling by nearly 6 % y-o-y. The sharp drop in wholesale activity began to level off, but wholesale volumes were still down by a whopping 18 % y-o-y in June.

Household consumption has fallen sharply. Second-quarter household spending on goods and services was down by 7.5 % y-o-y in real terms. Seasonally adjusted figures show that the volume of retail sales remained unchanged in June, but the sales were down by about 10 % y-o-y. Household disposable income fell by just 0.8 % y-o-y in the second quarter, although real wages were off by 5–6 %. Consumption was drawn down by rising savings in the second quarter. Households showed similar patterns during Russia’s recessions in 2015 and 2020.

While the contraction of Russia’s industrial output has been relatively moderate this year, commercial activity is down sharply 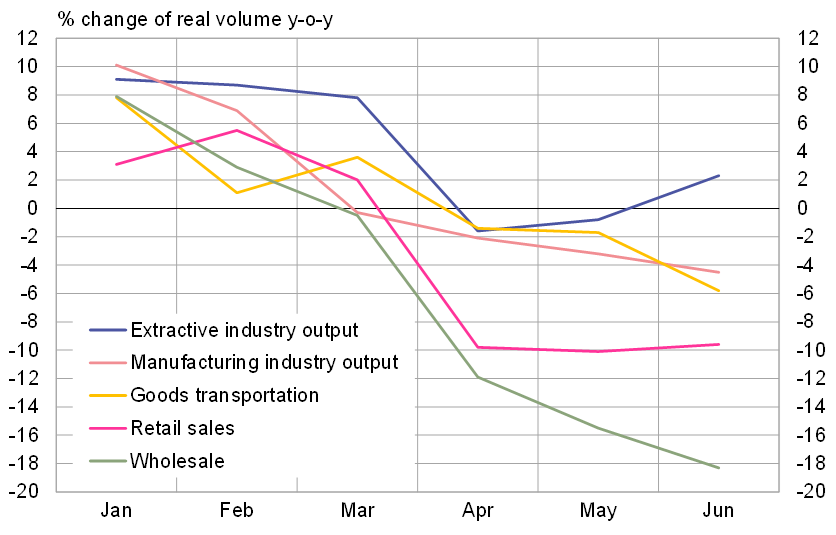