The Central Bank of Russia surprised markets with its much larger-than-expected 150-basis-point cut in the key rate to 8 % from 25th July. In the weeks before Russia’s invasion of Ukraine, the key rate was 8.5 %. Following the February invasion, the CBR raised its key rate to 20 % to contain ruble depreciation and soaring consumer prices.

The ruble has strengthened significantly in recent months due to restrictions placed on the foreign currency market by Russian officials and Russia’s giant current account surplus. Inflationary pressures have also been reduced by falling domestic demand as the economy has slipped into recession. Even if inflation has slowed in recent months, the CBR estimated that consumer prices were up by nearly 16 % y-o-y in mid-July. The steep rate cuts have plunged real interest rates deep into negative territory.

Domestic demand has fallen because of increased uncertainty caused by the war and poor economic development. Consumer demand has also been depressed by a high savings rate. Not only do Russians tend to save in the face of a weakening economy, the CBR notes that some of the increased saving is unavoidable. Russian consumers are unable to buy desired goods due to Western sanctions and the retreat of foreign businesses from the Russian market.

The CBR now forecasts that Russian GDP will contract this year and next by a total of 5–10 %, and that moderate growth will return in 2024. The central bank sees 12-month inflation running at 12–15 % at the end of this year and 5–7 % at the end of 2023. The CBR also expects the key rate to average 7.4–8 % during the rest of this year, implying a potential for additional, but less dramatic, rate cuts in the coming months. 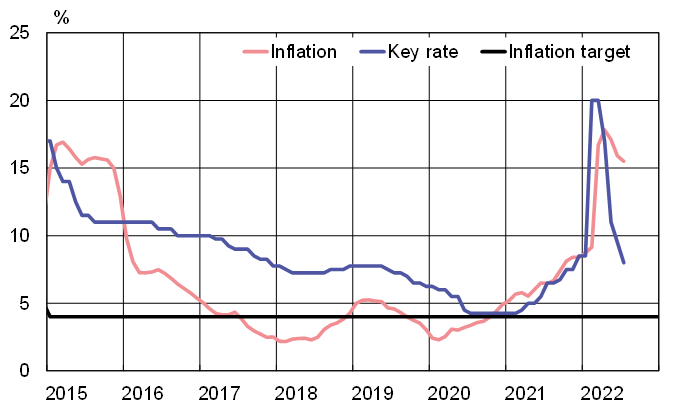