China’s National Bureau of Statistics reports that GDP contracted by 2.6 % q-o-q in the second quarter due to extensive covid lockdowns in several Chinese cities. While NBS figures show that on-year GDP growth in the second quarter was slightly positive (0.4 %), many observers argue that growth was probably lower. BOFIT’s own alternative calculations suggest that China experienced negative on-year growth in the second quarter. According to official NBS figures, growth declines were apparent in provinces subject to severe lockdowns this spring. For example, GDP was down by 14 % y-o-y in Shanghai, 5 % in Jilin and 3 % in Beijing.

A strong export trend supported growth in the second quarter. In contrast, domestic consumer demand contracted from a year ago and its contribution to GDP growth was negative. Monthly indicators show the sharpest contraction in consumer demand occurred in April and May. In June, nominal growth in retail sales was 3 % y-o-y. Accounting for inflation, real growth was still quite subdued (consumer prices in June rose by 2.5 % y-0-y). Industrial output picked up from April and May and hit 4 % y-o-y real growth in June.

While Chinese economy bounced back swiftly from the Covid Recession of spring 2020, it is unlikely to repeat this. Consumer confidence is faltering and construction activity is declining. Measured in terms of floorspace, the volume of construction started in June was down by 45 % y-o-y and real estate sales by 18 % y-o-y. The cooling of the housing market has only worsened the financial desperation of developers and the real estate sector. Due to unexpectedly sluggish global growth and high inflation, demand for Chinese exports is expected to weaken and thus is unlikely to serve as an economic backstop as it did in 2020.

Despite hopes that investment-driven stimulus will push economic growth in the second half of this year closer to the government’s official “about 5.5 %” annual growth target, it looks increasingly unlikely. The currently planned increase in investment is not nearly as large as would be required to offset low growth in consumer demand. It has becoming harder to find profitable investment projects in China, so any massive investment stimulus will increase the public-sector debt burden, economic imbalances and increase risk levels. 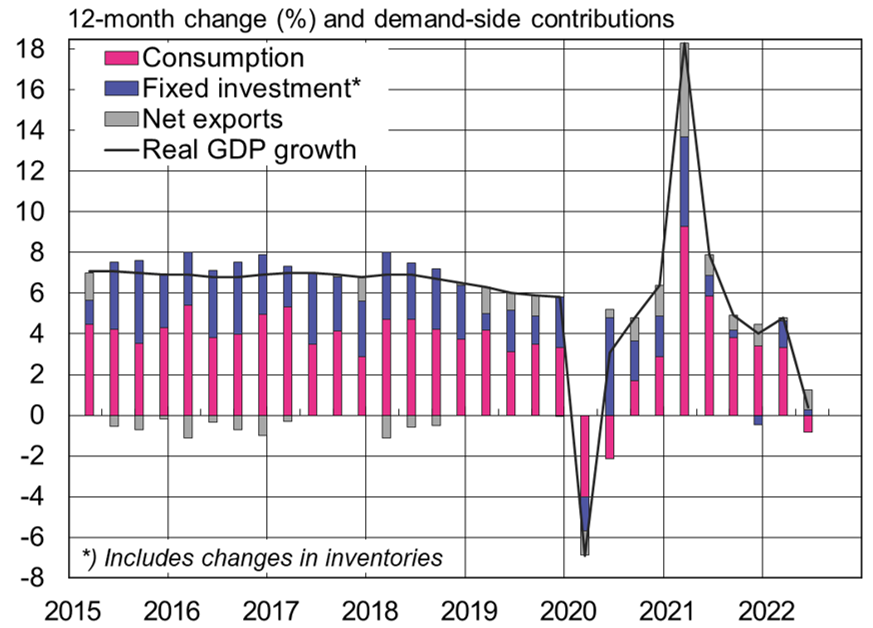