After around two months of covid lockdowns, Beijing officially returned to “normality” on May 29 and Shanghai lifted its lockdown on June 1. Changes were also made in government policies, most notably easing quarantine requirements. Since June, overseas arrivals and close contacts now face shorter mandatory quarantine periods. Internal border inspections and restrictions have also been reduced. Following the relaxations, infection rates have increased in June and July with China reporting an average of 890 daily confirmed cases last week, out of which 80 % were asymptomatic. Several local governments blame their rising infection numbers on travellers returning from abroad who now only face a mandatory quarantine period of 7 rather than 14 days.

Despite the easing of restrictions, China’s leadership stresses the need to maintain “dynamic zero tolerance” against the SARS-CoV-2 virus. While entire cities are less likely to be put under covid-related lockdowns, this month differing levels of restrictions remained in place in 41 cities affecting over 200 million people. Also residents in Beijing, Shanghai and several other metropolises must still get tested every second or third day to enter most indoor public spaces. Even when lockdowns are limited to districts within the city, residents still face disrupted lives. Just this week, four of Shanghai’s districts were locked down for a week due to rising covid cases.

The combination of stimulus, testing and lockdowns does little to relieve the uncertainty generated by China’s zero covid policies. High vaccination rates could help with the way forward, but China still has a way to go to reach sufficiently high levels. Experts claim that sufficient protection level from the covid vaccines used in China is only achieved after three doses. 90 % of China’s population has received two shots, but only 72 % of persons eligible for their third booster shot have taken it. Just 38 % of China’s over-80s cohort have received their booster and 27 % are still completely unvaccinated. The vaccination passport systems adopted in many countries are unlikely to find acceptance in China, where vaccination mandates have already generated considerable public resistance. For example, the city of Beijing recently presented a plan for a vaccination passport that would be required in spaces such as gyms, movie theatres and libraries. Even with a limited range of place affected by the requirements, it met with a considerable pushback by citizens. Officials quickly retracted the original plan, suggesting that the programme could be voluntary instead.

Most of China’s population has had their third covid vaccination, but vaccination rates for over-80s are still lagging. 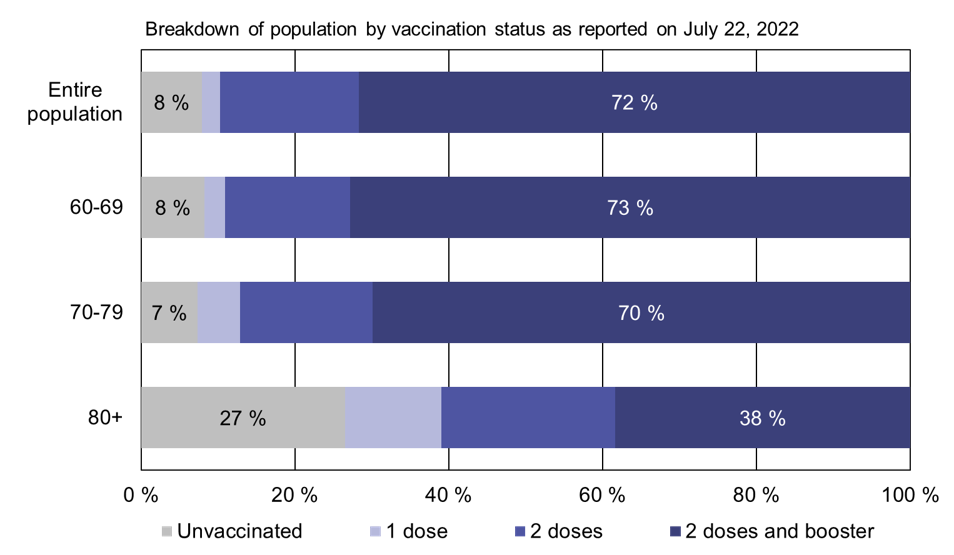