The monthly PMI readings, which are based on surveys of Russian purchasing managers by market intelligence provider S&P, give a sense of business sentiment about their near-term prospects. S&P’s June PMI readings for manufacturing and services were both above the neutral reading level of 50, indicating an improvement in economic activity compared to May. However, while domestic orders were rising, export orders continued to fall. The latest composite output PMI reading was also over 50. Nevertheless, it is hard to ignore that growth was driven by services and that manufacturing output continued to drop.

Every four months, S&P also releases a survey from private companies in a dozen countries about their business expectations for the next 12 months. The June survey reports Russian companies were the most pessimistic among the twelve countries and noted that business conditions had become significantly more challenging since the February invasion of Ukraine. Firms had problems with soaring commodity prices, difficulties in finding foreign customers caused by sanctions and feeble domestic demand. Many firms said they were having trouble getting parts, components and other inputs from abroad. Many companies are planning to reduce their fixed investment plans due to bleak prospects.

The Bank of Russia publishes monthly a relatively detailed monitoring of corporate payment activity. The July 7 report shows that the volumes of incoming and outgoing payments in June were 7.2 % lower (seasonally adjusted) than the averages for the first quarter of this year. While nearly every branch saw a contraction in payments traffic, the drops were sharpest in industries dependent of foreign demand. Corporate payments traffic is usually a good predictor of nominal GDP developments.

Russia’s economic outlook has thus stabilised somewhat from the initial weeks following Russia’s invasion of Ukraine and uncertainties caused by sanctions, but difficulties continue to prevail in many branches. In addition, the future outlook continues to worsen. 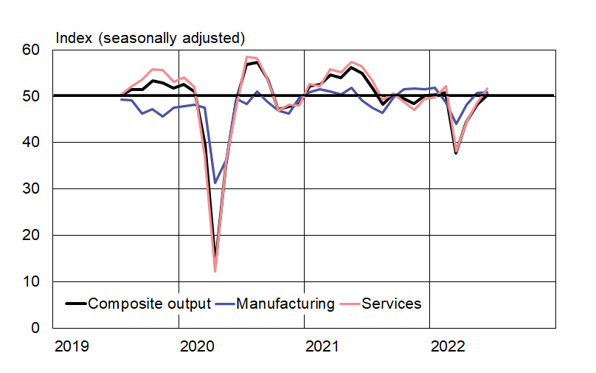