China Customs reports that the value of goods exports to Russia shrank by 17 % y-o-y in June. In response to Russia’s invasion of Ukraine in late February, China’s exports to Russia during the March-June period contracted by 15 % y-o-y. The value of goods imported from Russia grew by 56 % in June (up 54 % y-o-y in the March-June period). Much of the growth in the value of imports can be attributed to higher prices. China has been running a goods trade deficit with Russia for years, due to rising energy imports. Simultaneous growth in imports and falling exports has caused China’s trade deficit with Russia to widen rapidly.

About 75 % of the value of China’s imports from Russia are energy products. For March-May, the value of energy imports grew by 77 % y-o-y. The growth in import volumes of the main energy products have been much more modest. For example, China Customs reports that the value of crude oil imports from Russia grew by 72 % y-o-y in March-May, but the import volume was up by just 11 %. The value of coal imports grew by 67 %, but the volume of coal imports shrank by 14 %. During March-May, China saw its imports of liquefied natural gas (LNG) from Russia climb by 39 %, while imports of petroleum products were up over 600 % y-o-y. Their share of energy imports, however, is relatively small. The latest estimate from the CREA research group shows that China has become Russia’s top energy customer since Russia’s invasion of Ukraine. As of early July, China has imported 21 billion euros worth of Russian oil, an amount that roughly corresponds to the combined imports of Russian oil by next four largest customers (Netherlands, Germany, Turkey and India).

Unlike its trade with Russia, the value of China’s total goods exports rose in June by 18 % y-o-y (measured in US dollars). Exports to all of China’s major markets were up. Growth in goods imports was much weaker, growing by just 1 % in value. China’s overall trade surplus hit a record high in June. Import volumes of key commodities continued to fall. For example, the volume of China’s crude imports in June were down by 11 % y-o-y.

The value of China’s goods exports to Russia is falling even as the value of imports from Russia continues to soar. 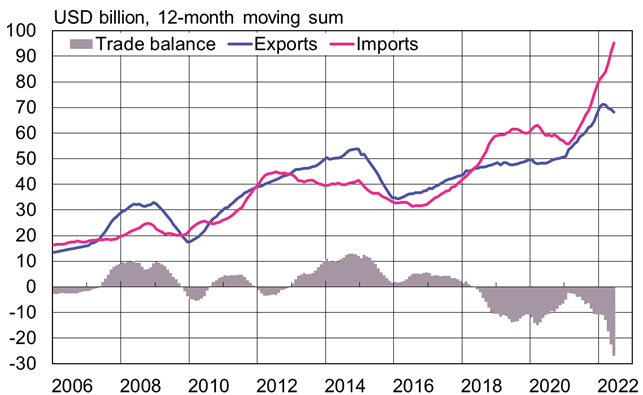