By some unofficial estimates, India is purchasing over 1 million barrels of Russian crude oil daily, which amounts to nearly a quarter of India’s total oil imports. Before Russia’s attack on Ukraine, Russia accounted for less than 1 % of India’s oil imports, but since then imports of Russian oil have soared.

The powerful growth in India’s imports of Russian oil reflects the fact that Russia is selling its oil at a discount due to Western sanctions. In recent months, Russia’s Urals blend oil has been about a third cheaper than North Sea Brent blend. Some market rumours claim that demand for discounted Russian oil has become so great that Indian traders are no longer able to purchase the quantities they seek.

India’s imports of oil from Russia requires some special arrangements as Western countries have complicated buying oil from Russia by e.g. limiting the use of Western currencies in paying for Russian oil and denying Russian oil tankers access to Western ports. It is also rumoured that India has been paying for its Russian oil in Chinese yuan and that Russia is willing to take payment for oil in high-value commodities such as gold. Traders can also disguise the country origin of oil by pumping oil from one tanker to another while at sea.

India has run a modest bilateral goods trade deficit with Russia since the turn of the millennium. That deficit exploded, however, with Russia’s attack on Ukraine. The value of Indian goods exports to Russia fell in March-May by over 50 % y-o-y. In contrast, the value of imports from Russia more than tripled in the same period. India mainly imports energy products from Russia (about half of the value of imports in 2021, over half of which was crude oil) and industrial supplies (about a third of imports). For its part, India exports industrial supplies to Russia (nearly a third of the value of total exports in 2021), investment and consumption goods (each accounting for about a fifth of total exports), as well as foodstuffs.

The value of India’s goods imports from Russia has skyrocketed in recent months. 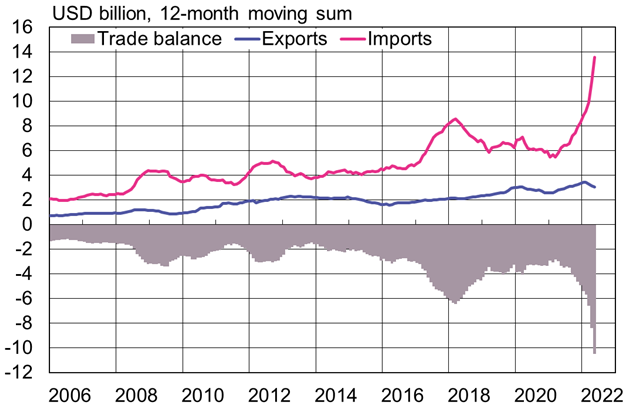