Before Russia’s invasion of Ukraine in late February, the ruble-dollar exchange rate stood at about 75 rubles to the dollar. The ruble initially plunged on the initial wave of uncertainty caused by the war and increased Western sanctions. At its nadir in early March, the ruble fell to around 120 rubles to the dollar. Currency restrictions imposed by the Central Bank of Russia quickly reduced demand for foreign currency at the same time as forex supply increased after firms were required to repatriate their export earnings. In combination, these measures helped propel the ruble-dollar back to pre-invasion levels by mid-April. The ruble’s exchange rate continued to strengthen in the May-June period. At the end of June, the CBR’s official ruble-dollar rate approached 51. A strong ruble, however,  reduces the ruble-denominated profits of export firms as well as the government’s oil tax revenues, which are typically denominated in dollars. First deputy prime minister Andrei Belousov recently stated that the “optimal” exchange rate currently is somewhere in the range of 70–80 rubles to the dollar.

The Russian government has tried to quell ruble appreciation by easing some of the capital controls introduced at the start of the Ukraine invasion. The initial requirement that firms repatriate 80 % of their export earnings was lowered to 50 % and eventually eliminated altogether. Russian export earnings in recent months have remained high, mainly on hefty export prices for crude oil and natural gas. At the same time, imports have contracted by about 50 % from a year ago, reducing forex demand.

The exceptional growth in the current account surplus partly reflects the limited ability to use forex assets under current conditions. Western sanctions have restricted Russian imports. Sanction-related risks have also dampened the willingness of Russians to move capital abroad. As a result, it has also become possible to relax the rules on taking money out the country. In recent days, the maximum monthly amount private individuals can transfer to foreign accounts has been raised to 1 million dollars. Bank transfers can be made by private Russian individuals and citizens of “friendly” states. Bank transfers by EU citizens and firms are still subject to restrictions, however.

On Tuesday (July 5), president Vladimir Putin signed a decree on currency controls empowering a joint commission of the central bank and finance ministry with the authority to set repatriation requirements on foreign currency earnings. The same decree forbids the transfer of dividends and corporate profits in the form of foreign currency.

The absence of large foreign financial institutions in Moscow currency exchange trading is reflected in the depressed trading volumes. Western sanctions have also limited the possibilities for the CBR to intervene in forex markets. Forex trading on the Moscow bourse in May and June was down by about 45 % y-o-y. Due to capital controls, the official ruble rate in Moscow does not necessarily reflect the ruble’s exchange rate outside Russia. 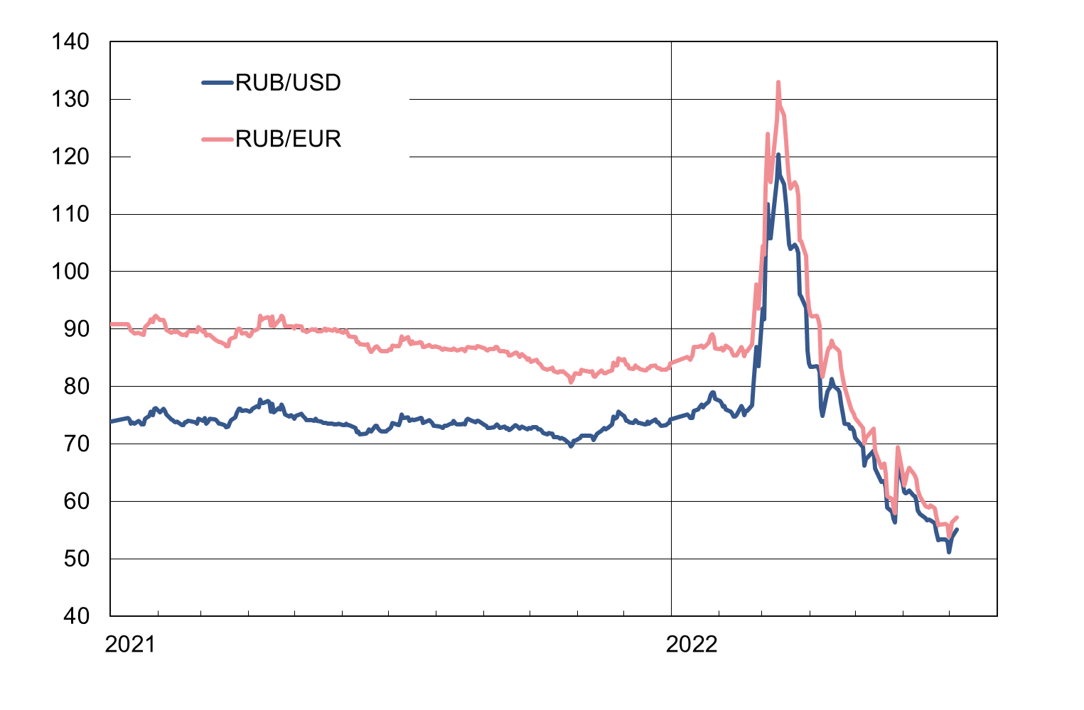