Russia is a major global producer and exporter of grains. Figures from the UN’s Food and Agriculture Organization (FAO) show that in 2020 Russia accounted for about 11 % of global wheat production and 19 % of global wheat exports (making Russia the world’s largest wheat exporter that year). In addition, Russia is a globally significant exporter of barley, sunflower oil and sunflower seeds.

Russia plays an important role in global grain exports, particularly for countries in Africa and the Middle East. According to a March 2022 UNCTAD report, in over 20 African nations the share of Russia in their wheat imports was at least 30 %. The African nations most dependent on Russian wheat imports are Benin (100 %), Sudan (about 70 %), Ruanda (over 60 %), Tanzania (over 60 %) and Madagascar (over 60 %). Many Middle Eastern and African countries also import large amounts of grain from Ukraine.

Russia has blocked Ukraine’s grain exports by preventing Ukraine from shipping from its Black Sea ports. At the beginning of June 2022, Ukrainian officials estimated that Russia’s grain thefts from Ukraine had reached 500,000 metric tons, an amount worth 100 million dollars. 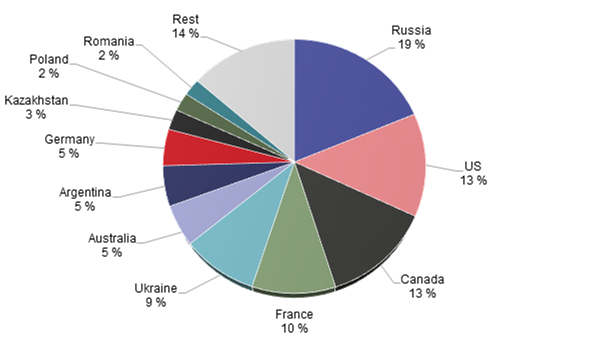