At the G7 summit held in late June, much of the discussion focused on dealing with Russia’s war in Ukraine and the knock-on effects to the global economy. G7 leaders considered various measures to curb Russia’s export earnings, efforts to support Ukraine and ways to constrain the impacts of the war on the world economy.

The G7 agreed on banning imports of gold from Russia. Gold is among Russia’s most important export commodities after oil and natural gas, even if it only accounts for a few percent of the value of Russian exports. The war and sanctions have, however, already limited Russia’s gold-exporting possibilities. G7 leaders also discussed the idea of imposing a price ceiling on Russian oil to limit Russian export earnings. Mounting uncertainty and sanctions are already gradually eroding Russia’s export earnings. After posting a current account surplus of nearly 40 billion dollars in April, Russia’s current account surplus fell to 15 billion dollars in May. Several import restrictions on Russian commodities such as wood and coal enter into force in July-August. The oil import restrictions the EU announced at the beginning of June enter into force after transition periods of six to nine months.

The G7 leaders reiterated their support for Ukraine. The countries committed to giving Ukraine this year a total of slightly over 30 billion dollars in economic and humanitarian aid. Ukraine urgently needs the aid as the state has seen its revenues dry up since Russia launched its brutal war. Even with massive foreign donations, a large part of state spending must be financed by the National Bank of Ukraine (central bank), which further increases the vulnerability of the Ukrainian economy.

The G7 leaders agreed on a number of measures to mitigate the impacts of the war on global food security. Most notably, Russia’s war on Ukraine has diminished wheat supplies on the global market as Ukraine is a major wheat exporter. Russia is not only preventing grain exports from Ukrainian ports, it has also destroyed Ukraine’s grain reserves, burned fields and illegally confiscated Ukrainian agricultural products. The war already threatens also Ukraine’s 2023 grain harvest. The sanctions of G7 countries on Russia do not apply to exports of agricultural products.

Despite a large drop, Russia’s May current account surplus was still substantial 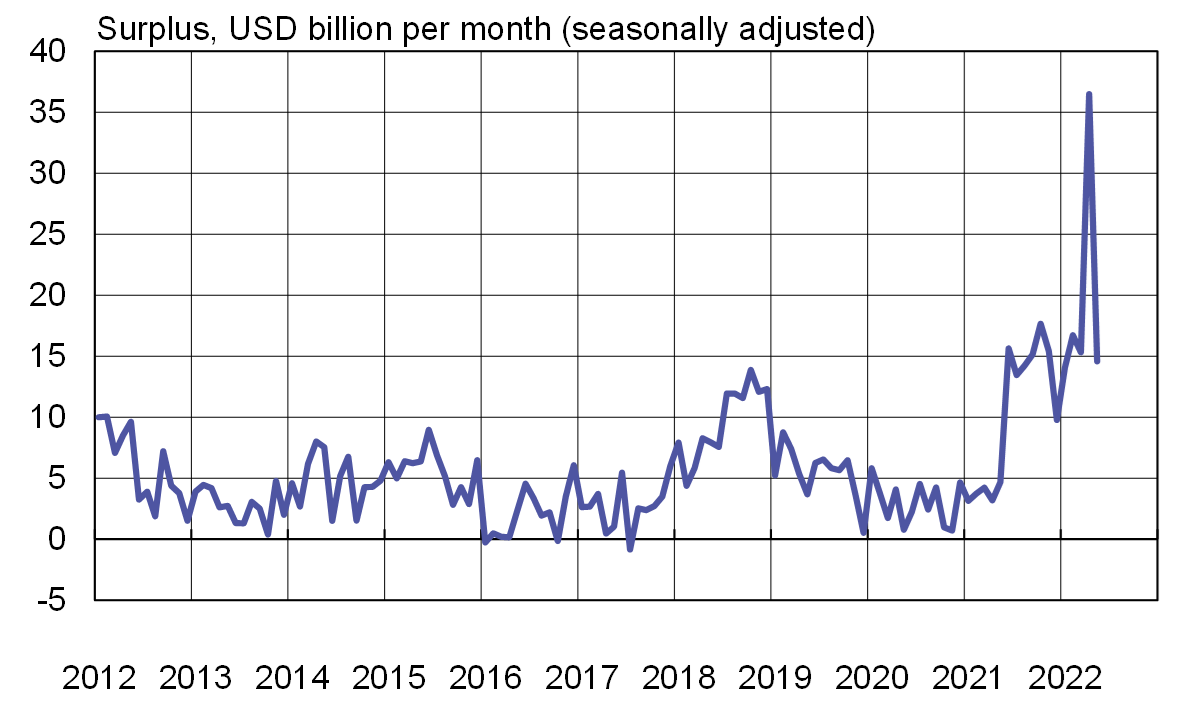