The broader impacts from Russia’s invasion of Ukraine in late February have gradually emerged throughout the Russian economy. High inflation erodes Russian purchasing power and depresses consumption. While military production appears to have supported industrial output, most branches are struggling. The preliminary estimate from Russia’s economic development ministry suggests that May GDP shrank by 4 % y-o-y. The June survey of Consensus Economics found that the average of Russian GDP forecasts sees a GDP contraction of 8 % this year and 2 % next year.

Rising uncertainty and evaporating purchasing power have depressed consumer demand. Retail sales volumes were down by 10 % y-o-y in May. Russian consumer prices rose by 17–18 % y-o-y in April and May. The average real monthly wage (inflation adjusted) shrank by 7 % y-o-y in April. Russia’s unemployment rate remained at a historically low level of 3.9 % in May.

Rosstat figures show that industrial output contracted by 2 % y-o-y in May. Mining & quarrying (includes oil & gas) was down by 1 % and manufacturing down by 3 %. Trends within manufacturing were mixed. Passenger car manufacturing, for example, nearly ceased with Russia producing fewer than 4,000 cars in May. Russia was producing over 112,000 cars a month just a year ago. While production of e.g. train cars and excavators declined substantially, on-year production of certain types of turbines, RF electronic devices and pharmaceuticals grew by several fold in May.

Russia’s Center for Macroeconomic Analysis and Short-Term Forecasting (CMASF) finds a larger contraction in Russian industrial output in recent months when military production is excluded. CMASF estimates industrial output fell by 4 % in May. Russia’s lower-house Duma this week approved a law amendment that allows the government to impose special measures on firms to fulfil military needs. Firms can be compelled, for example, to manufacture goods for the military, repair military equipment or provide the military with transport. 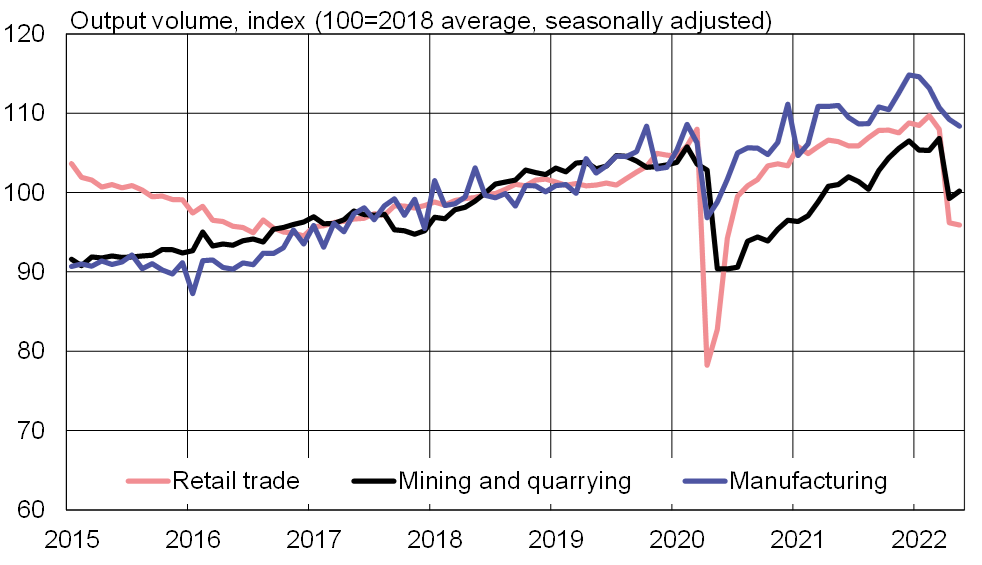