Much of the rise in demand for these crops has been driven by the rise in demand for livestock feed as Chinese eat more meat. Nearly 90 % of soybeans and 75 % of maize is used as feed for industrialised meat production. According to the UN’s Food and Agriculture Organization (FAO), Chinese per capita meat consumption has risen to about 50 kilograms a year, well above the global average (34 kg/year) or the average for emerging economies (27 kg/year), but still below the average for developed economies (nearly 70 kg/year). The 2019 outbreak of the African swine fever epidemic cut pork consumption by nearly a quarter, shifting demand to beef and poultry. Chinese domestic pork production and domestic consumption levels have gradually returned. Meat consumption overall is expected to rise further in the years ahead, further increasing demand for feed crops.

China’s domestic production of maize and wheat has been insufficient to deal with burgeoning demand since 2018, so nearly 10 % of maize and wheat consumption has been covered by imports in recent years. In addition, the lion’s share (roughly 80 %) of soybeans and barley consumed in China are imported from abroad. Among other things, pollution of water and soils and excess use of fertilisers have degraded the quantity and quality of domestic arable land. These factors, combined with increasingly frequent extreme weather events, have hampered the ability to increase domestic production.

Grain imports have soared over the past five years. While China has only accounted for about 3–4 % of global wheat and maize production for many years, it has lurched to around 10 % of global consumption of these crops in recent years and become the world’s fourth largest grain importer. Increased meat consumption has also boosted meat imports. Last year, over 20 % of beef consumption was covered by imports. Domestic production still goes a long way of providing other staple meats, even if their imports are also up (e.g. China covers about 7 % of its pork and lamb consumption from imports, as well as about 5 % of its poultry consumption). The biggest suppliers of agricultural products to China last year were located in South America (30 % in 2021) and North America (22 %). The combined share of the rest of Asia and Oceania was 29 %, Europe 17 % and Africa 2 %. Europe’s share, which has nearly doubled over the past decade, has grown steadily.

Per capita consumption of maize and soybeans in China has risen sharply in recent decades. 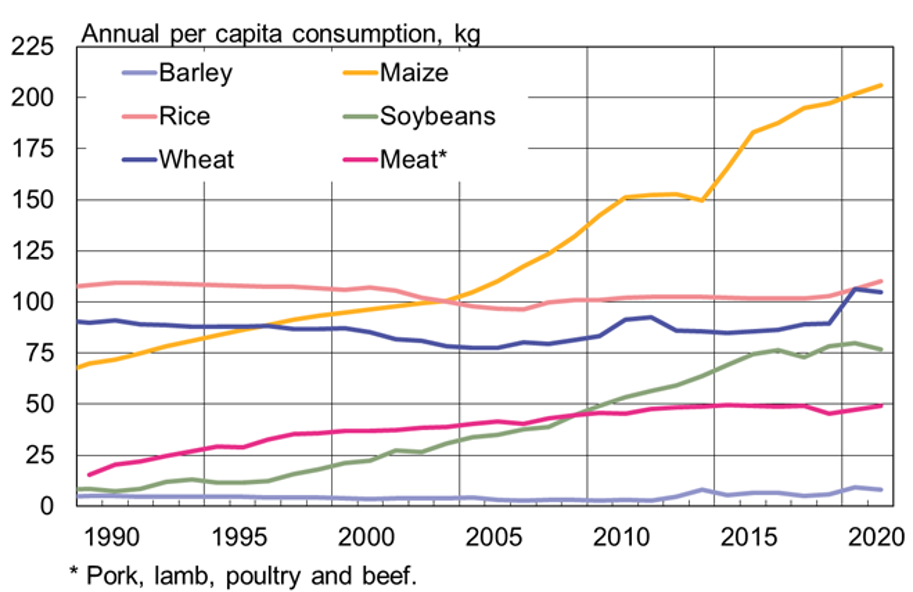