Pensions were raised at the beginning of this month by 10 %. The same increases were made to the minimum wage and official subsistence minimum, a move that affects a range of social support payments. Pensions saw an 8.6 % increase at the start of this year. The increases are meant to compensate pensioners for rising consumer prices. Indeed, the latest hike was specifically intended to offset the fierce jump in prices caused by Russia’s attack on Ukraine.

Since the economic boom of the 2000s, which featured large real term gains in pensions, the pension policies have been mainly geared to keeping pace with inflation. Pensions have indeed remained rather unchanged in real terms for several years, even with two additional one-off payments to pensioners decreed by president Vladimir Putin on the eve of the Duma elections in 2016 and 2021. Among other amendments made in 2020, pensions were indexed in the Russian constitution. The amendment did not specify, however, a reference indicator for the indexing.

Pensioners who are not working are entitled to indexed increases in their pensions. The government says that there are about 35 million non-working pensioners and about 15 million people eligible for the latest increases in social benefits. The finance ministry estimates that the extra funds to finance the pension hikes and social support increases this year will amount to an equivalent of 0.3−0.4 % of GDP. The additional funding needed to cover these costs next year is expected to be roughly 0.6 % of GDP. Over 90 % of the extra spending will go to pension hikes. The increases will be paid out of the state social fund budgets. As the state social funds are dependent on the federal budget to finance spending especially now when they are losing revenues due to the economy’s recession, they will receive the extra funds needed from the federal budget.

Pensions were earlier raised also with a view of not leaving them too much behind from the general wage growth. For the past several years real wages have risen notably faster than real pensions. During much of the past decade, the ratio of the average pension to the average wage recorded by statistics (not including grey economy wages) held steady at about one third. During 2020 and 2021, that ratio fell below 30 %. The latest pension hike should for a while help the relative position of pensioners to wage-earners as real wages at least in the corporate sector are expected to fall in Russia as the economy has entered recession. President Putin has ushered that certain special groups of workers in government budget sector will also receive pay increases.

With the latest hike, the average Russian pension at the nominal exchange rate is currently about 230 euros a month. In terms of purchasing power, however, pensions go more than twice as far in Russia as the average price level is much lower than in the euro zone. 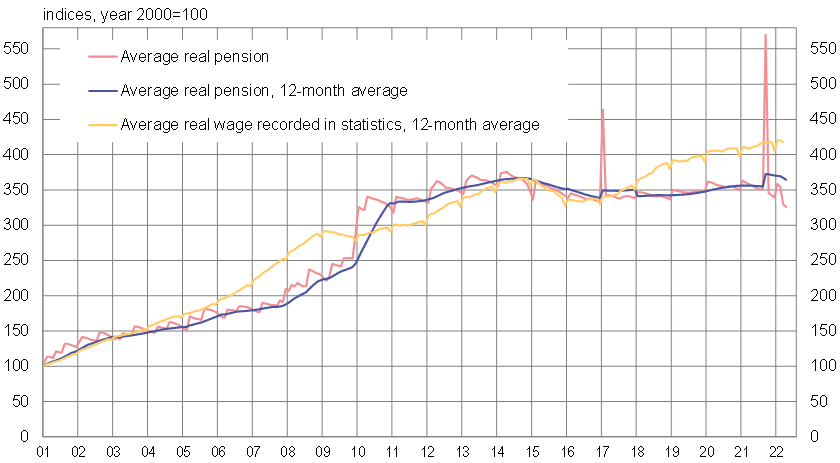