Nominal federal budget revenues were up by 34 % y-o-y in the first four months of 2022. Revenue growth in April was about 30 %. The revenue rise in March and April was entirely driven by taxes on oil & gas. As in March, budget revenues from oil & gas taxes, which are for an overwhelming part defined in dollars, were up by over 100 % y-o-y in April. Tax revenues from oil & gas taxes take a while to reflect changes in oil prices, so the rise in April largely reflects the high on-year gains in oil prices in previous months and the ruble’s very low exchange rate in March.

Near-term expectations are weaker if the ruble does not weaken considerably. With significant discounts, the price of Urals-grade crude oil in April was only about 10 % higher than a year ago. Moreover, Russian crude oil production contracted significantly in April. Oil & gas tax revenues accounted for nearly half of federal budget revenues in January-April.

The drop in other federal budget revenue streams became sharper in April, with revenues falling by almost 20 % from a year earlier. This was due to the fact that revenues from value-added taxes were down by nearly half, reflecting the economic downturn and import collapse. Other tax revenues still increased by nearly 20 % y-o-y. Despite such increases, it should be noted the high inflation erodes gains in nominal budget revenues or expenditures (consumer price inflation hit 18 % y-o-y in April and industrial producer prices were up 27 % y-o-y in March).

Nominal spending growth in the federal budget accelerated in April to 40 % y-o-y. The on-year spending increase for the January-April period was 25 %. Nearly half of the April rise in spending came from spending categorised as defence, which was up by roughly 150 % from a year earlier. Defence spending was also up by nearly 40 % y-o-y in January-April. Spending on domestic security and law enforcement rose by 6 % y-o-y in the first four months of this year. Measures to soften the effects of economic distress are also evident in federal budget spending. Spending on various sectors of the economy was up by 40 % y-o-y in January-April.

The federal budget this year is still slightly in surplus. The surplus in April for the past twelve months corresponded to about 1 % of GDP.

Growth in federal budget revenues has slowed since February; non-oil revenues are down and spending growth is up 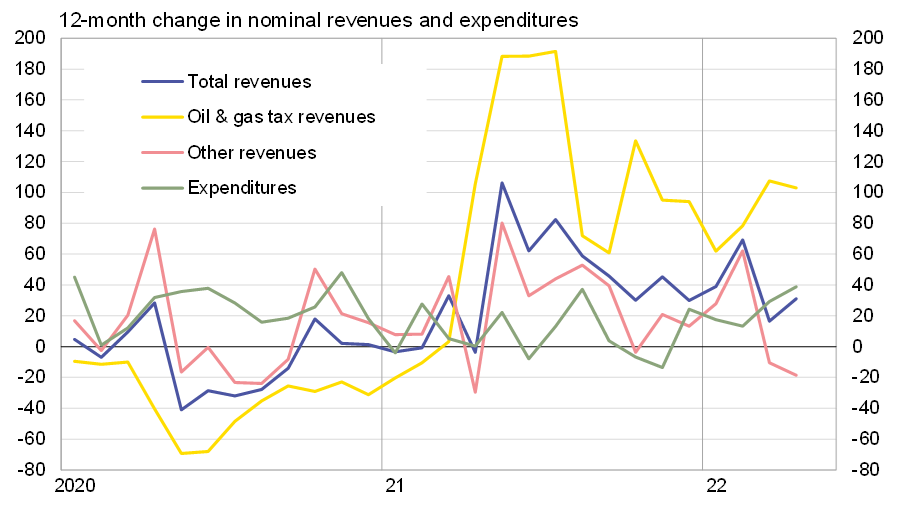