China’s National Health Commission reports that daily cases this week exceeded 500 for the first time since March 2020. The case numbers are still remarkably low for a country of 1.41 billion people. At the advent of the covid pandemic in January-February 2020, China’s infection rate averaged around 2,000 a day. Not a single covid death has been reported in China since January 2021.

China has used a “zero covid” suppression strategy that has incorporated strict lockdowns and restrictions on movement. While these measures have become more targeted over time, China still has outdoor movement bans in some communities e.g. in Beijing, Shandong and Jilin. Factories, schools and public spaces remain closed in some regions. China has recently begun to discuss cutting back on its zero-covid policy and learning to live in a world where the covid-19 virus is endemic. Even so, foreign travel, for example, is not expected to open up for a long while.

Vaccination rates in mainland China are generally high, but vary across regions. As of end-February, over 85 % of the Chinese population had received two doses of vaccine and 38 % had received their third booster shot. China has not approved the mRNA vaccines used in the West, preferring to stay with more traditional inactivated virus vaccines manufactured in China. The Chinese vaccines, most notably from Sinovac and Sinopharm, have shown waning resistance to the delta and omicron variants. China is currently developing its own mRNA vaccines.

The covid situation in Hong Kong got out of hand quickly. The region’s 7.4 million population has this month witnessed daily case numbers in excess of 50,000 and nearly 300 daily covid deaths. Until very recently, Hong Kong had managed to keep its case numbers extremely low (typically a few dozen cases a day) through strict covid policies and mandatory quarantines for anyone seeking to enter the region. Hong Kong residents also have access to the Pfizer-BioNTech mRNA vaccine, but the overall vaccination rate is relatively low. At the beginning of March, roughly 70 % of the population had received two doses of vaccine and about a quarter had received their booster. Notably, the vaccination rate for Hong Kong’s elderly population is low.

Hong Kong has imposed very strict limits on public gatherings and all its residents are to be tested three times during March. In addition, the government is trying to ramp up hospital capacity. As a worsening of the covid situation hurt the economy, Hong Kong is distributing consumption vouchers to their residents again this year. Despite the efforts, institutional forecasters have significantly cut their growth projections for Hong Kong, some even predicting a recession. 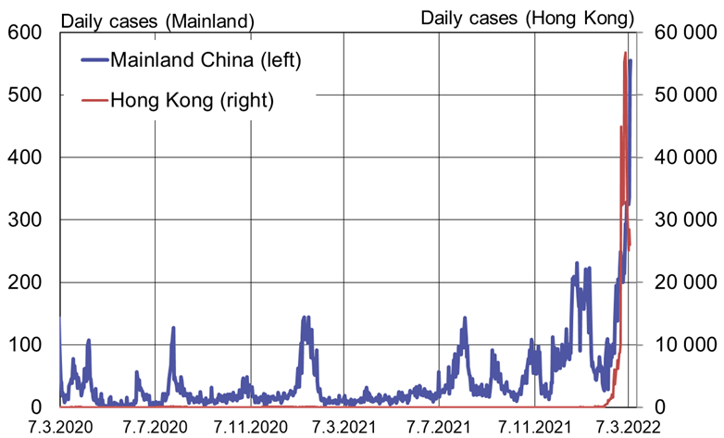