On Saturday (Mar. 5), the 2,980-member People’s National Congress convened for a week-long plenary session in Beijing. As part of the opening-day presentations, premier Li Keqiang laid out the government’s working programme, including this year’s economic growth targets. The official national GDP growth target was set to 5.5 %. It came as no surprise, as the provincial 2022 growth targets announced in January already indicated that the national target would be in the range of 5–6 %.

Stimulus measures will be needed even if China’s growth target this year is fairly modest from a historical perspective. Economic growth has been dragged down especially by the on-going struggles of the real estate sector and lockdowns caused by the highly contagious omicron variant. China’s growth outlook is also clouded by the sharp rise in commodity prices and external demand uncertainty stemming from Russia’s attack on Ukraine. China officially speaks more vaguely about a triple pressure: “falling demand,” “supply disruptions” and “diminished expectations.” The working programme accentuates that economic stability is the government’s crowning priority, which will undoubtedly guide all its policy decisions this year.

In addition to the GDP growth target, the working programme laid out other targets for this year. Urban areas are expected to create 11 million new jobs and the unemployment level is expected to remain below 5.5 %. Disposable household incomes should keep pace with economic growth, while on-year inflation should hold at around 3 %. The target ratio of budget deficit to GDP will shrink from 3.2 % last year to 2.8 % this year. As in 2021, this year’s quota for local government special bonds will be 3.65 trillion yuan ($580 billion) to fund various projects.

Unlike in earlier years, no special targets have been announced for reducing energy consumption. Instead, the emphasis this year is on securing energy supplies. Premier Li stressed China’s need to increase domestic production of oil, natural gas and coal, replenish national stockpiles, as well as stabilise price trends. The shift in policy emphasis is likely to impede measures to reduce carbon emissions for at least the rest of this year. 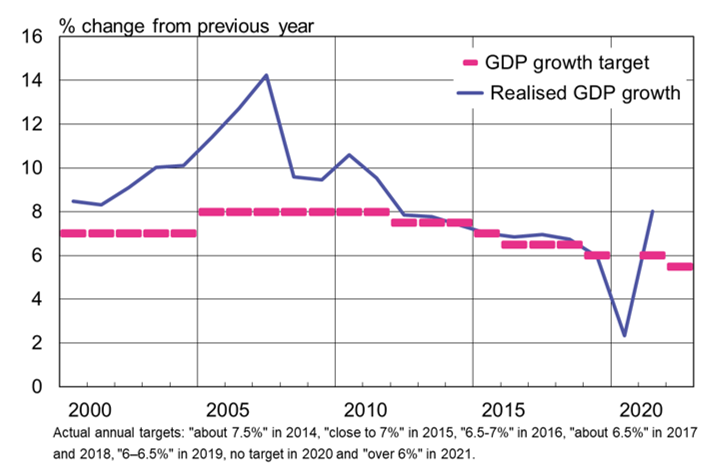