The ruble’s exchange rate has fallen to historical lows this week. Western sanctions have blocked the Central Bank of Russia from supporting the ruble through sales of its foreign currency reserves. The sanctions have hit hard the ability of Russia’s banking sector to borrow on international markets. Regular Russians, panicked at the thought of their savings evaporating, have drained their bank accounts and hoarded cash.

To deal with the double-whammy of a freefalling ruble and bank runs, the CBR raised its key rate to 20 %. The CBR also vastly increased the amount of liquidity available to the markets and pulled back on banking regulations to prevent a collapse of the banking sector. President Vladimir Putin issued a decree on capital controls that requires e.g. export firms to sell 80 % of their forex earnings to support the ruble. There are also restrictions on the amounts that can be transferred to foreign accounts and taken out of the country in the form of forex cash. Russian firms and private individuals can still pay their invoices to foreign firms in foreign currencies, however.

The MOEX, the Moscow Exchange’s ruble-priced share index, lost a third of its value on February 24 – the largest one-day drop in the history of the Moscow bourse. The collapse of the stock market affects the wealth of many Russians as the Moscow Exchange last year had about 15 million retail customers. The Moscow Exchange has been closed all this week, but Russian shares listed on foreign stock exchanges have seen their prices decline sharply this week.

The Russian government has decided to support the Russian stock market by purchasing 1 trillion rubles worth of shares of Russian firms with money from the National Welfare Fund. In addition, the possibilities of foreign investors to repatriate their investments in Russian assets are restricted.

World oil prices soared over the past week. The Brent crude oil price this week climbed above $110 a barrel for the first time since summer 2014. The price of Russian crude (e.g. Urals) has been considerably lower. The US and several other countries have promised to release crude oil from their strategic reserves to quell the price rise. At their meeting on Wednesday (Mar. 2), the representatives of the OPEC+ countries, which includes Russia, reaffirmed their commitment to not increasing oil output any faster than they had agreed earlier. 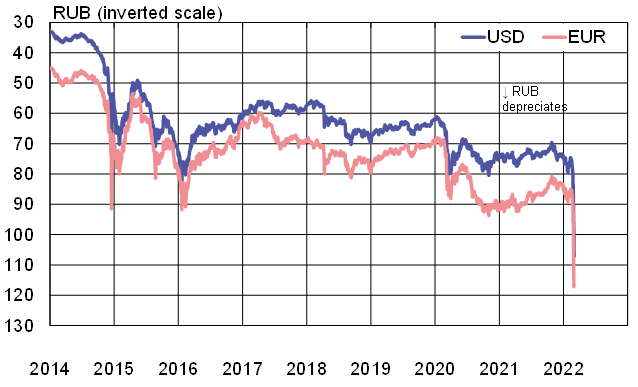