As part of the February 4 meeting of presidents Vladimir Putin and Xi Jinping at the opening of the Beijing Winter Olympics were signed e.g. a joint policy decree and a “road map” to increase bilateral trade to a level of $200 billion a year by 2024.

New oil & gas contracts were also announced in conjunction with Putin’s visit. Gazprom and CNPC said that they had agreed on additional gas supplies of 10 billion m3 a year over 25 years. Fulfilment of the agreement apparently requires additional investment on Gazprom’s part and no starting date has yet been announced. The gas supply is set to grow also through the Power of Siberia pipeline, which should hit full capacity of 38 billion m3 a year by 2024. Last year, Russia exported about 14 billion m3 of natural gas (pipeline gas and LNG) to China. China accounted for about 6 % of Russia’s gas exports. Russia accounted for about 8 % of China’s gas imports.

Rosneft and CNPC also announced a 10-year agreement on delivery of a total of 100 million tons of crude oil. Russia last year exported about 70 million tons of crude oil to China. China accounted for 30 % of Russia’s oil exports. Russia accounted for 16 % of China’s crude oil imports. Russia’s economic relations with China and other major economies are discussed in our latest BOFIT Policy Brief. 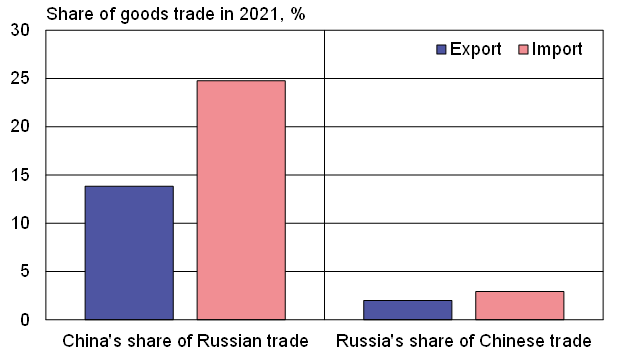