The value of the assets in the National Welfare Fund (NWF) stood at $182.6 billion at the end of 2021. In the official reporting, which uses last year’s official GDP forecast, that amount corresponded to 11.7 % of GDP. The ratio of NWF assets to GDP can be expected to decline to around 11 % when Rosstat’s actual 2021 GDP figure comes in.

Government’s excess revenues from oil & gas taxes are transferred annually from other state accounts to the NWF. The excess oil & gas tax revenues are defined as the revenues collected on that part of the oil price that exceeds the reference price defined in the NWF savings rule. Last year there was nothing to transfer, however, as no extra earnings accrued in 2020 due to actual oil price slightly below the reference price. NWF assets were also not used last year to fund government budget spending because the budget moved from deficit into slight surplus.

The size of the NWF was affected by a couple of other factors. First, the value of NWF assets fell in the final months of 2021 due to a drop in the price of Sberbank shares owned by the NWF (Sberbank shares represent about a quarter of total NWF assets). Second, fluctuations in the ruble’s exchange rate last year also affected the valuation of the Fund’s assets in rubles. About 65 % of the assets are held in foreign currencies. These forex assets basically comprise liquid deposits at the central bank equivalent to nearly 7 % of Russian GDP at the end of last year. In addition, the ratio of NWF assets to GDP declined as GDP rose due to economic recovery and quite high inflation.

Similar to 2018 and 2019, the excess oil & gas tax revenues amassed last year were substantial – equivalent to about 2.5 % of GDP. The reference price for Urals oil last year was $43.30 a barrel, but the realised average price was $69. The excess revenues raised will be transferred to the NWF later this year (in recent years the annual transfer has occurred in spring or summer). Excess tax revenues from oil & gas are also expected this year. This year’s reference Urals price in the budget is $44.20 a barrel. The average Urals price in January exceeded $85. Moreover, oil prices significantly higher than the reference price are expected for the rest of this year.

With the NWF’s increasing size, plans have been drawn to invest some assets e.g. in the form of loans to fund infrastructure projects. Such illiquid assets, which in earlier years have been tied mostly to projects for long periods (excluding the ownership stake in Sberbank), represent about 13 % of the NWF’s total assets. It was recently decided that such project funding, which earlier was available when NWF’s liquid assets exceeded 7 % of GDP, is now available if the value of the NWF liquid assets exceed 10 % of GDP. Liquid assets, however, now also include the budget estimate for excess oil & gas revenues in the current year. Moreover, the increase does not preclude funding of infrastructure projects already planned within the framework of 2.5 trillion rubles allocated for 2022–2024, an annual amount equal to 0.5–0.6 % of GDP. 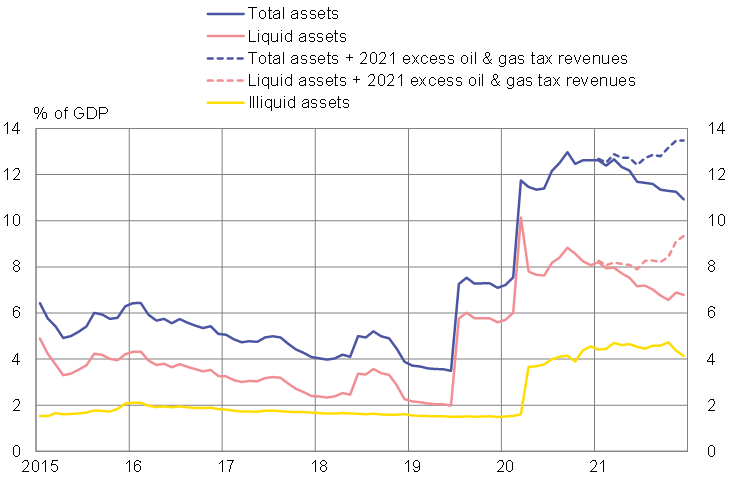