Preliminary Rosstat figures put Russia’s population at the end of 2021 at 143 million people (does not include population of Crimean peninsula, which was illegally annexed by Russia in 2014). When net migration is included, the population shrank by about a half percent last year. The natural change in Russia’s population (excluding net migration) hit a historical low in 2021 with the population declining by over 1 million people. Russia’s birth rate again shrank slightly and the mortality rate soared. Deaths exceeded 2.4 million, the highest level in the entire post-Soviet era. Deaths last year were about 600,000 more than the annual average between 2015 and 2019. In 2020, about 290,000 more people died than the 2015–2019 annual average.

In particular, deaths among the elderly population have spiked during the covid pandemic. In 2020, the death rate among Russians over the age of 64 was about 260,000 persons higher (20 %) than the average of 2017-2019. That number corresponds to roughly 1 % of the entire 64+ age cohort. Deaths among the working-age population also increased. Among working-age population, in 2020 died about 60,000 people (15 %) more than in 2017–2019 on average. The UN reports that the death rate for Russia’s working-age population was already nearly twice that of the European average before the covid pandemic. In 2020, the life expectancy of an average Russian fell to 71.5 years, down from 73.3 years in 2019.

According to official reports, Russia has had 12.3 million confirmed covid cases, or roughly 8 % of the population. Official covid deaths number about 330,000 since the start of the pandemic. With the emergence of the omicron variant, the number of reported covid cases has surged since early January and is currently running above 150,000 a day. The good news is that the daily number of covid-caused deaths has been declining. As of end-January, 55 % of the population had received two vaccine doses. The Russian government says that it has no plans at this time to implement any additional nationwide restrictions or lockdowns to deal with the pandemic. 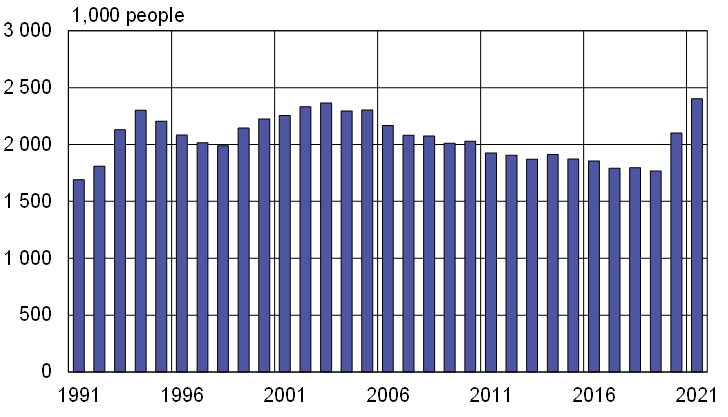 Note: Figures do not include Crimean Peninsula, which was illegally annexed by Russia in 2014.