The export volumes of crude oil, Russia’s top export, continued to rise briskly in July-September, even if the volume of oil exports was still well below pre-pandemic levels. For the first nine months of the year, the oil export volume was down by 6 % y-o-y. Russian oil production continues to be constrained by the conditions of the OPEC+ agreement, even if production ceilings have been gradually lifted. The price of Urals crude continued to rise in the third quarter to an average of around $70 a barrel. Pipeline gas exports are up sharply this year. Nearly the same amount of pipeline gas was exported in the third quarter as two years ago. The price of natural gas also rose substantially in the third quarter. Export volumes of liquefied natural gas (LNG) in contrast have declined slightly this year. Crude oil, petroleum products and natural gas combined have accounted for about half of Russian goods exports this year.

Growth in the value of Russian goods imports faded in the third quarter compared to the second quarter, but imports were still up by 30 % y-o-y. The slowdown in import growth was due largely to a pull-back in imports of machinery, equipment & vehicles (a category that accounts for about half of Russian goods imports). The rise in the value of imports of foodstuffs and chemical products in particular was still quite rapid in the third quarter from previous months partly due to higher import prices. Chemical products accounted for 18 % and foodstuffs 12 % of goods imports this year. 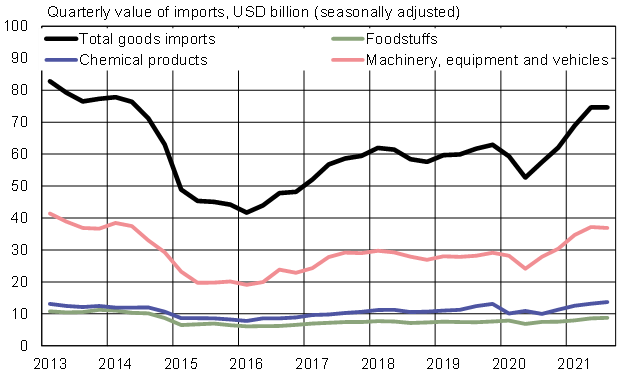