The Moscow Exchange has been lifted this year by a strong updraft from rising oil prices. News of the omicron variant of COVID-19, however, panicked investors on November 26, triggering a plunge in international stock exchanges and depressing oil prices. On the day, the dollar-based RTS index of the Moscow bourse fell by 5 % and the Brent oil price by 12 %. The slide in the RTS index, however, had already begun on October 26, when the index hit its highest level since May 2011 and concerns over geopolitical tensions began to affect market sentiment. Despite recent drops in the Moscow exchange, share prices are still up by 14 % and Brent crude by 30 % from the start of the year.

The sharp gains in Russian exports and rising oil prices have pushed Russia’s current account surplus to record levels. The current account surplus for the past four quarters corresponds to roughly 5 % of GDP. Russia’s foreign currency reserves have also climbed to historic highs. Geopolitical tensions, on the other hand, have hurt confidence in the ruble. The ruble’s exchange rate has now at the same level as at the start of the year against the dollar and is up by only 9 % against the euro. Capital continues to flow out of the country, particularly from the corporate sector. The net outbound flow of private-sector capital over the past four quarters corresponds to roughly 4 % of GDP. The need to purchase foreign currency within the framework of the government’s fiscal rule has also restrained Ruble’s appreciation. 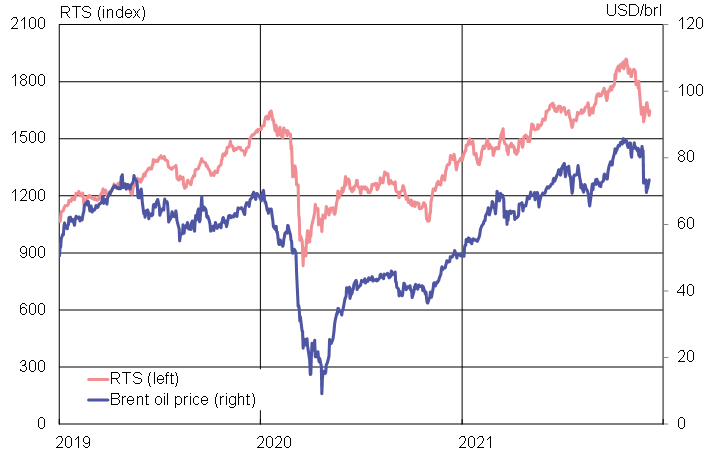