Demand-side figures in Rosstat’s national accounts show a strong rebound in seasonally adjusted growth in fixed investment in the wake of the Covid Recession of spring and summer 2020. Notably, growth was very high in the second quarter of this year, with the level of fixed investment exceeding the peaks of 2012 and 2013. Manufacturing enjoyed robust fixed investment growth (BOFIT Weekly 37/2021), particularly in metal refining.

In August, most on-year trends of key economic indicators were still well in positive territory: industrial output grew by 4.7 % y-o-y, manufacturing by 3.1 % and the volume of retail sales by 5.3 %. The economic development ministry estimates that GDP grew by 3.7 % y-o-y. The high annual growth figures, however, speak mostly to the low basis of summer 2020. Seasonally adjusted industrial output has been contracting since June, mostly due to reduced output in the extractive sector. The seasonally adjusted volume of retail sales has developed sluggishly in recent months. Russian economic growth has faded in past months. 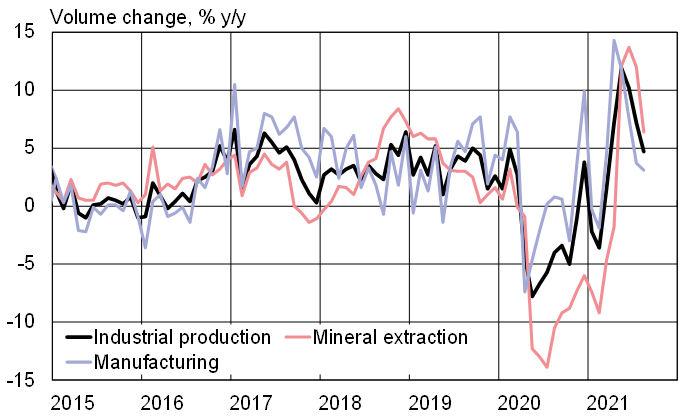