In the first half of this year, real fixed investment increased notably and was up by 5 % from two years previous. Even with their share of the value of total investment having risen for several years, growth in the real volume of fixed investment of large and medium-sized firms, as well as the state, has slightly outpaced total investment growth since 2019, which is rather rare.

The investment of large and medium-sized firms in oil & gas production declined in the first half to an extent that it returned to the same level as two years previous. Investment in production of petroleum products also contracted, but after last year’s very strong rise was still much higher than two years previous.

While the pace of investment growth in large government sectors such as healthcare and education has subsided this year, the investment is still up by several double digits from two years previous. With last year’s government budget investment wave behind, the government is preparing plans to fund investment projects out of the National Welfare Fund (NWF). The law permits provision of NWF financing and investment in non-liquid assets as long as the NWF’s liquid assets equal at least 7 % of GDP at the end of the following year. The NWF’s liquid assets have slightly exceeded this 7 % threshold since spring 2020. Higher oil prices are translating to higher oil & gas revenues for the federal budget, part of which will be transferred to the NWF.

The share of large and medium-sized firms, as well as the state, in fixed investment in Russia has increased in several years 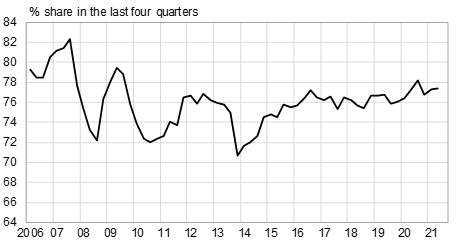