On September 10, the Central Bank of Russia decided to raise the key rate by 25 basis points. The key rate now stands at 6.75 %. The CBR, which began to tighten its monetary stance last March, has raised the key rate by a total of 250 basis points since then. As part of its forward guidance, the CBR did not rule out the possibility of further hike at its next meetings.

The CBR said the decision to hike reflected the ongoing rapid rise in consumer prices of recent months. In August, food prices rose by 7.7 % y-o-y, non-food goods 8.0 % and services 3.8 %. August total consumer price inflation hit 6.7 % y-o-y, a level well above the CBR’s inflation target of close to 4 %. The recent uptick in inflation reflects the inability of supply to keep up with the better-than-expected recovery in domestic demand. The acceleration in inflation has also raised the inflation expectations of firms and households to levels not seen for nearly five years. The CBR’s forecast sees 12-month inflation slowing to a range of 5.7–6.2 % by the end of this year and to 4–4.5 % in 2022.

At the start of September, the CBR published a draft of its monetary policy guidelines for 2022–2024. The draft mentions monetary policy targets, principles and measures to be implemented within that framework. The key monetary policy principles remain pursuit of a publicly set inflation target (close to 4 %), the key rate and forward guidance, as well as predictable and transparent decision-making. The draft now moves to the president and cabinet for comment before a final version is submitted to the Duma. 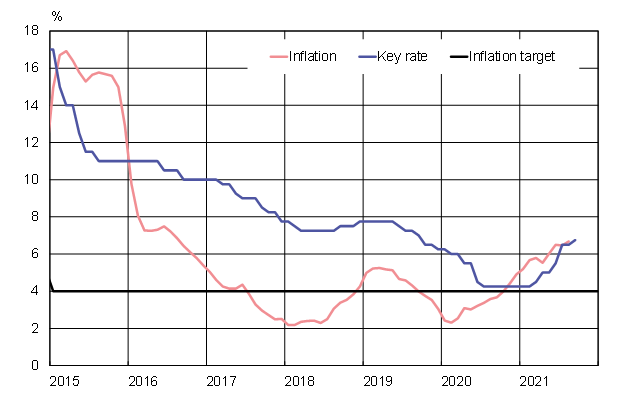