At a meeting of the financing and economic affairs committee on August 17, president Xi Jinping said that a key feature of China’s future development is common prosperity, that is more even distribution of wealth and income in Chinese society. Xi told his audience that regulation of the rich needs to increase, excessive incomes should be limited and the rich are encouraged to donate money for development of society. China’s state news media reports that income inequality will be dealt also with through more progressive taxation, improved social security and increased income transfers.

The common prosperity discussion has motivated companies to act. For example, technology firms Alibaba and Tencent have together promised over $20 billion for improving social equality, healthcare, education and rural areas. In addition, certain state agencies such as the central bank have been quick to signal their support for the idea.

President Xi has talked about common prosperity at least since 2015. The theme was incorporated into the five-year plan and longer-term development targets approved last spring. In June, the state council selected Zhejiang province as a trial area. In July, 15 smaller areas in the province were selected for pilot testing of the common prosperity concepts. Authorities have big plans for the trial areas, as over the next five years they should be able to increase household incomes considerably, education should reach to a top national levels and health measures such as life expectancy, should improve to Western levels without raising the healthcare costs for households. Leading global technologies should also be adopted.

While measurement of income disparities in China is challenging, Chinese experts generally agree they are very large. China’s official Gini coefficient for income differences is 0.47, a level very high by international standards. However, the official figure is seen to leave out the highest earners and Chinese studies suggest that income differences could actually be considerably higher. Rather than measure income, the World Bank, for example, measures consumption disparities, which in China’s case are only slightly above the international average. Credit Suisse estimates that that are at least 5 million “dollar” millionaires in China, but the wealth differences between Chinese are not exceptionally high (on par with France and considerably smaller than in India).

Issues related to income distribution have always enjoyed a high profile in Communist China. During Mao Zedong’s era, the party sought to distribute wealth more evenly, while under Deng Xiaoping’s reform policies, getting rich was again permitted. President Xi’s policies appear to be a step back from Deng’s stance. However, campaign-type measures seen so far will have only limited impact. The focus should be on large-scale reforms on improving social security and social safety nets, and education across the country. The shift in the messaging from economic growth to wealth distribution may also signal that China is preparing for lower economic growth in the years ahead.

Income inequality, which declined during Mao Zedong’s leadership, began to rise again after the economic reforms of the 1980s 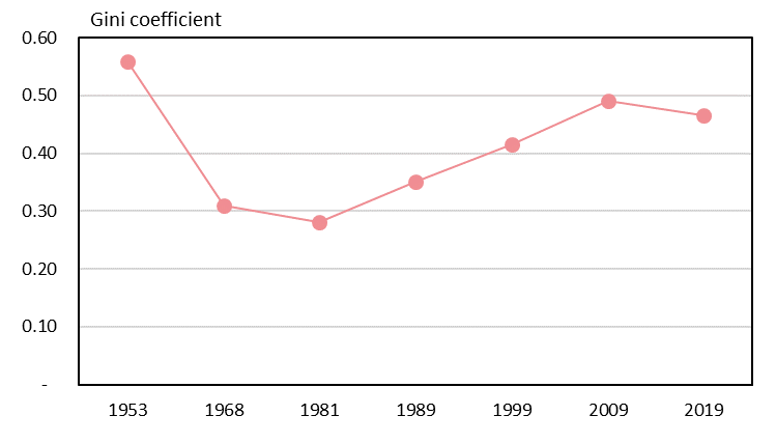