The strong rise in oil prices (BOFIT Weekly 27/2021) and recovery of the Russian economy from the depths of last year’s Covid Recession (BOFIT Weekly 33/2021) have lifted share prices on the Moscow Exchange. Between the start of the year and end-August, the ruble-based MOEX index climbed by 17 %. It currently stands at an all-time high. The dollar-based RTS index was up by 19 % from the start of the year. Due to ruble weakness, however, it is still about 30 % below its historical high of May 2008.

The interest of Russian retail investors in the stock market has also increased, further boosting the performance of equities on the Moscow Exchange. As of mid-August, 13.3 million Russians had investment accounts, an increase of more than 50 % from the end of 2020. Factors such as the reduction in bank deposit rates have helped fuel private individuals’ appetite for investment. The role of Russian institutional investors on the Moscow Exchange is quite small.

The Moscow Exchange has several distinguishing features: the small share of publicly traded shares, dividends that are quite high by international standards and the heavy weight of oil & gas companies. The shares available for trading vary from company to company, but for top 50 companies the average is about 30 %. The average dividend yield of traded companies is over twice that of the average for emerging market exchanges. Companies in the oil & gas sector make up about 40 % of the MOEX index. 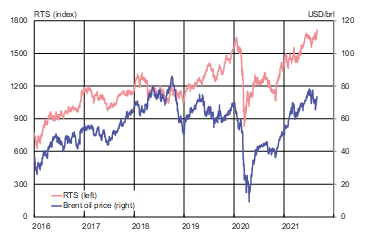