There has been a strong rebound in net profit of Russia’s corporate sector after last spring’s sharp decline that resembled the recoveries after 2009 and 2015. Net profit has recovered rapidly to the tune that in January-February it was up by about a quarter from last year’s pre-covid level. While the net profit statistics are formed from the profits and losses of individual firms, Rosstat’s monthly figures do not include small firms, companies in the financial sector, or state agencies.

The lion’s share of the net profit of the corporate sector is generated in three economic categories. When crude oil and natural gas production and related services, production of petroleum products, pipeline transmission of oil & gas, as well as the production, transmission and distribution of electricity are included in the energy sector, the share of the energy sector in the net profit of the entire corporate sector has fluctuated between less than 30 % to over 40 % over the past couple of years. Russia’s manufacturing sector’s branches (excluding production of petroleum products) has generated 20–30 % of the net profit, of which 8−13 percentage points has been contributed by metals production. The large fluctuations in global commodity prices particularly affect the profits of Russia’s oil and metals industries. In any case, the government absorbs part of the higher export earnings of the oil sector as it applies export tariffs and production taxes which are linked progressively to the export price of oil.

The statistically recorded figures show that wholesale and retail trade together account for 17−20 % of the corporate sector’s net profit, with wholesale alone contributing as much as 13−18 percentage points. On the other hand, a significant chunk of profit-and-loss information in the retail branch is not covered by these statistics because the branch includes a large number of small firms and individual entrepreneurs. Wholesale’s share of net profits fell to just 5 % during the recession last year due to the decline in retail activity, corporate output and investment.

The recovery in corporate sector profits over the past seven months has largely been driven by manufacturing branches (not counting oil refining), and especially soaring profits in the metals industry have boosted the net profit of the entire corporate sector. Wholesale has seen its profitability recover for a rather large part from last year. Since last spring, profits in the energy sector, however, have remained relatively low.

Because Russian firms traditionally fund a large share of capital investment out of pocket, profits are important in this respect. Last year, the share rose to a record near 57 % (not including small firms, for which timely investment financing data are not compiled). About 60 % of the firms responding to Rosstat’s annual investment survey say that they have experienced insufficient own funds as a constraint on their investments. At the same time, the top investment concerns of responding companies also include other issues such as the uncertainty associated with the Russian economy and investment risks. About a tenth of Russian general government budget revenues come from taxes on corporate profits. 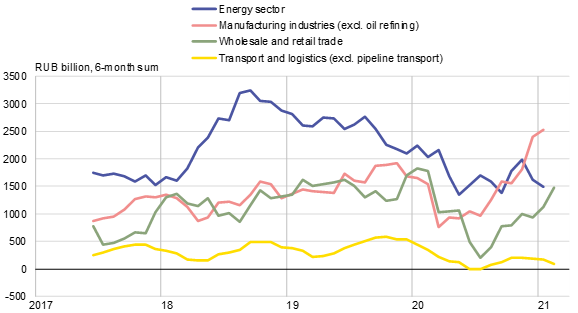