The growth in mortgage lending accelerated in the first three months of this year. In March alone, banks granted new housing loans worth a total of 500 billion rubles, or 52 % more than a year earlier. In January-March, 1.16 trillion rubles in housing loans were granted, a 43 % increase from 1Q20. The share of housing loans in total household bank loans rose to 47 %, its largest share ever.

Housing markets have been supported for several years by numerous state investments and support programmes. Housing demand has been propped up e.g. with family benefits (“maternal capital benefits”) and since 2018 a housing loan programme for families with small children. Yet another support programme was introduced in April 2020 that made certain households eligible for a housing loan carrying a fixed rate of just 6.5 % p.a. for the purchase of a new apartment. The subsidies do not apply to the market for old apartments.

The growth in demand supported by the cheap loans has been reflected in housing prices. In the October-December period last year, prices of new apartments climbed on average by 12 % y-o-y. The variation was large from city to city, however, with housing prices in some places rising clearly faster. The Federal Antimonopoly Service (FAS) has been instructed to look into pricing practices among construction companies. Price increases stem not just from high demand, but also higher construction costs due to labour shortages caused after a large share of guest workers have been unable to return to Russia due to covid restrictions.

The housing credit market is solidly in the hands of Russia’s state-controlled banks. Sberbank controls about 50 % of the market, with VTB having another 20 %. The combined market share of the next three largest state banks (Gazprombank, Rosselkhozbank and Rosbank) is about 10 %. Housing loans in Russia are granted at a fixed rate. Thus, the rise and fall of interest rates is not reflected in household debt-servicing costs. The discussion about permitting adjustable interest rate housing loans continues, but no major changes are expected in the near future.

The combination of a rising credit stock, soaring housing prices, and a decline in real household incomes will likely increase banking sector risks. The volume of non-performing housing loans in the first quarter of 2021 rose by over 10 % y-o-y. Due to the rapid growth in the credit stock, however, the relative share of non-performing loans declined to under 1 %. The market consensus presumes that Russia’s large state-owned banks have sufficient resources available to withstand a substantial increase in credit losses. 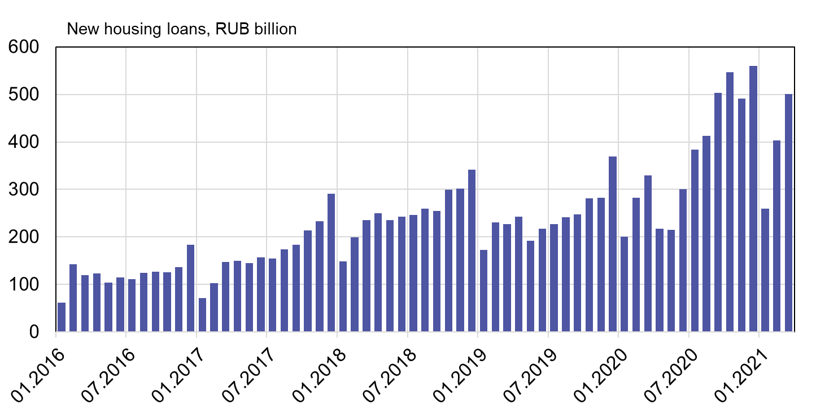