In the first quarter of this year, disposable income growth climbed rapidly due to last year’s low basis reference. Still, the pace was slower than GDP growth. Real disposable income rose in January-March by 14 % y-o-y and by 12 % in urban areas. Average consumption spending last year declined sharply in the first quarter of 2020, while in the first quarter of this year growth was high. Average consumption expenditure grew by 18 % and 16 % y-o-y in urban areas. Under the five-year plan announced in March, China seeks to hold growth in per capita income a level roughly on par with GDP growth. In recent years, consumer spending has grown more slowly than incomes, which has hindered China’s transition to a consumption-driven growth model.

According to official figures, China’s employment situation has roughly returned to pre-covid levels. Even if China has shifted away from reporting the number of registered unemployed people to releasing survey-based unemployment figures, also the new approach fails to provide a comprehensive picture of China’s overall employment situation. There is strikingly little fluctuation in the numbers over time. In March, for example, official urban unemployment was 5.3 %, the same level as in January 2020. In February 2020, when the covid shock hit, the government reported that unemployment had risen briefly to 6.2 %, even if by some estimates one out of five workers were temporarily out of a job. 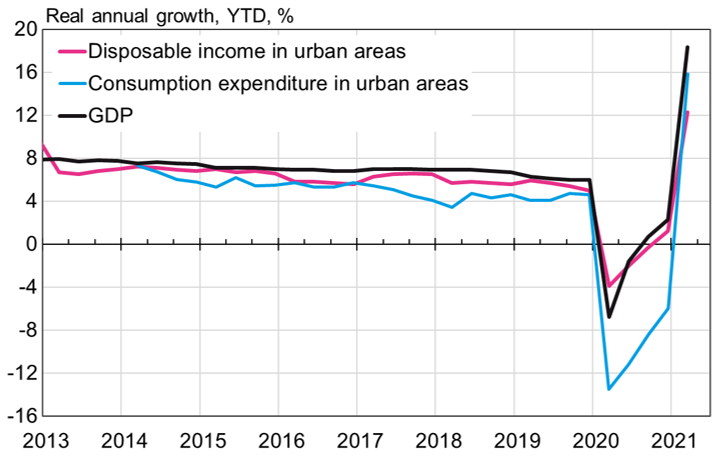