Several Russian economic indicators for January and February suggest that production and consumption were largely unchanged from the end of 2020, even if Russia is still struggling with the fallout from the covid epidemic. Indeed, the percentage changes are usually negative when compared to the beginning of 2020. For example, the economy ministry’s monthly GDP indicator contracted in February by 2.5 % from February 2020.

Industrial output volume contracted by 1.9 % y-o-y in January and 3.7 % in February. Output continued to decline especially in the mineral extraction industries, largely due to output ceilings imposed under the OPEC+ agreement. Manufacturing output shrank by 1.3 % y-o-y in January-February, but when the output indictor is seasonally adjusted, it reveals that most of covid dip has already passed. The volume of construction in January-February was at the same level as in the same period the previous year. Construction has suffered surprisingly little from the impacts of the covid epidemic, due in part at least to the fact that very little of construction activity has been shut down at any time during the pandemic.

Retail sales fell by 0.7 % y-o-y in January-February. For the retail sector, the current view is that most of the impacts from the covid crisis have also already passed. Demand is returning as unemployment declines and real wages again rise. The February unemployment rate was 5.7 %, down from a peak of 6.4 % last August. In addition, bank lending to households continues to soar. Lending in both January and February was up 15.4 % y-o-y. The increase slightly exceeds the already blistering growth pace of 15.3 % maintained last year.

The improving economic situation is also reflected in surveys of consumer confidence, which are up sharply from just a few months ago. Consumer confidence, however, is still lower than it was prior to the covid crisis. In March manufacturing purchasing managers’ index stood at 51.5, indicating improving conditions for that sector, although index declined slightly from reading of 51.7 in February. 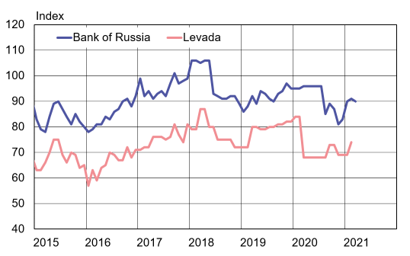