Roughly 2.1 million people died last year in Russia. Mortality grew by 320,000, an increase of 18 % y-o-y, which is a far greater increase than at any time in the past two decades. Excess mortality saw its sharpest increase in North Caucasus regions, particularly Chechnya (mortality up 45 %). Death rates also climbed strongly in Western Siberia in Russia’s top oil & gas-producing Yamalo-Nenets and Khanty-Mansi autonomous areas (nearly 30 %), as well as in Moscow and St. Petersburg (23 %). The growth in mortality in Eastern Siberia and the Far East Federal District was more modest than elsewhere in Russia. Official figures released by Russia’s health ministry show that covid-19 to date has caused the deaths of about 93,000 people in Russia.

About 1.4 million babies were born in Russia last year. The birth rate fell by 3 %, or slightly less than in previous years. Russia’s goal, however, has been to increase the birth rate in order to mitigate the coming contraction in the labour force. In 2019, Russia began to increase the retirement age gradually. This should increase the size of the working-age population slightly in next years. Over longer run, however, the number of working-age persons is expected to return to decline. Raising the pension age easies the pressure of pension spending on state finances, but its impact on increasing the size of labour force could be limited. In recent years, about 30 % of pensioners under the age of 73 were still working. Moreover, pensioners may not be particularly well suited to jobs that need filling.

Immigrants, particularly labourers from Central Asia, have long contributed to making up gaps in the Russian workforce. Due to the covid pandemic, however, many migrant workers lost their jobs last spring and returned to their home countries. Even with the improvement in the labour market, they have not returned to Russia due to travel restrictions imposed to control the spread of covid. The number of immigrants to Russia declined last year, while the number of emigrants from Russia increased. The net migration flow was still positive, but it was less nearly 200,000 persons or 60 % smaller than in the previous year. The reduction in the influx of migrant workers has even caused labour shortages in certain branches and regions. 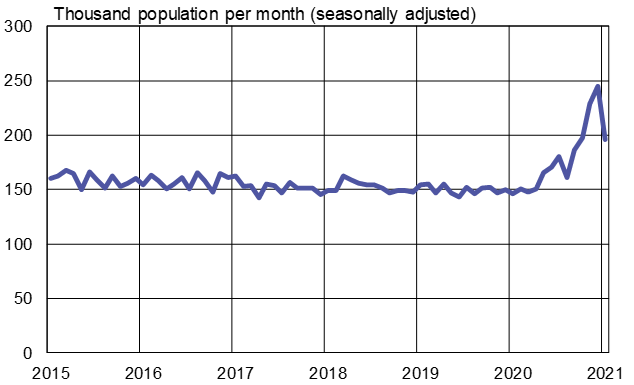