Relations between Asia’s two giants have become tense with the border squabbles of recent months that have claimed several lives. Even as the military posturing has cooled, tensions continue on other fronts, particularly trade policy. India, for example, has imposed special reviews of Chinese foreign direct investment, limited the interactions of Indian state-owned companies with Chinese firms and imposed bans on the use of certain Chinese software.

As the clear underdog, India has long been concerned with its China trade relations. Figures for the most recent statistical year (April 2019–March 2020) show that India’s goods trade deficit with China amounted to around USD 50 billion and accounted for about a third of India’s entire trade deficit. The structure of China trade is strongly unfavourable to India, which mainly imports consumer goods and capital goods from China, while exporting mainly lower-grade intermediate goods and commodities. Like many countries, India is dependent on imports from China over the short-term in key sectors such as the pharmaceutical industry.

Concerns about being disadvantaged in trade with China and other countries in the region are an important reason for India's withdrawal last November from the Regional Comprehensive Economic Partnership of 15 Asian countries. India’s trade negotiations with Europe and the United States have also been challenging. India seems to be responding to its trade issues by retreating to protectionist measures. Such a short-sighted approach could slow India's commercial development and reinforce its underdog status relative to China and other countries. Like many of China’s neighbours, India, in light of recent events, is forced to reassess its role in the global economy and international politics.

The heightened tensions between India and China come against the backdrop of India’s struggling economy. Many Indians want to open up their economy even as the number of COVID-19 infections climb. India’s economic recovery has also been hobbled by an ongoing banking crisis and fragile public finances. The latest IMF forecast sees India’s economy contracting by 4.5 % this year. 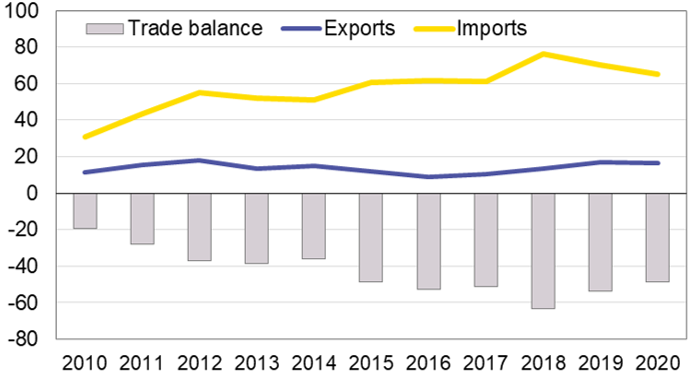