The recent measures are driven by China's efforts to bring in capital and labour, especially from Hong Kong, to the mainland. For example, in late June new financial market measures were announced to facilitate the provision of wealth management services between special administrative regions and the mainland. While the details are still vague, the programme would operate much in the same way as the equity and bond market cooperation programmes between mainland China and Hong Kong. Furthermore, as of July, foreign professionals living in Guangdong province will be able to apply under certain conditions for tax subsidies to compensate for the tax gap between the mainland and Hong Kong. The Hong Kong national security law, which is seen as significantly undermining Hong Kong’s autonomy, entered into force at the same time.

The most ambitious infrastructure project of Greater Bay Area initiative so far has been the construction of a 55-kilometer bridge connecting Hong Kong, Macao and Zhuhai. The bridge, which opened in October 2018, saw lower-than-expected traffic volumes in its first year of operation. Another bridge under construction is a 24-kilometer span running from Shenzhen to Zhongshan. It is scheduled to open in 2024.

Guangdong province has developed over recent decades into one of China's most important economic areas. The city of Shenzhen, in particular, has become the country's technology hub. Measured in US dollars, the GDP figures for Shenzhen and Guangzhou have matched Hong Kong over the past two decades. While GDP per capita in Guangdong (USD 13,700 in 2019) is higher than the Chinese average (USD 10,300), living standards are well below those of Hong Kong, which had a GDP per capita of USD 48,800 in 2019.

The Greater Bay Area development plan was published in February 2019, and has been integrated into China's national urbanisation effort. The purpose of the national plan is to intensify cooperation on integration of urban centres and the creation of vigorous metropolitan areas. Besides the Pearl River Delta, large expectations have been placed on development projects around Beijing and Shanghai. 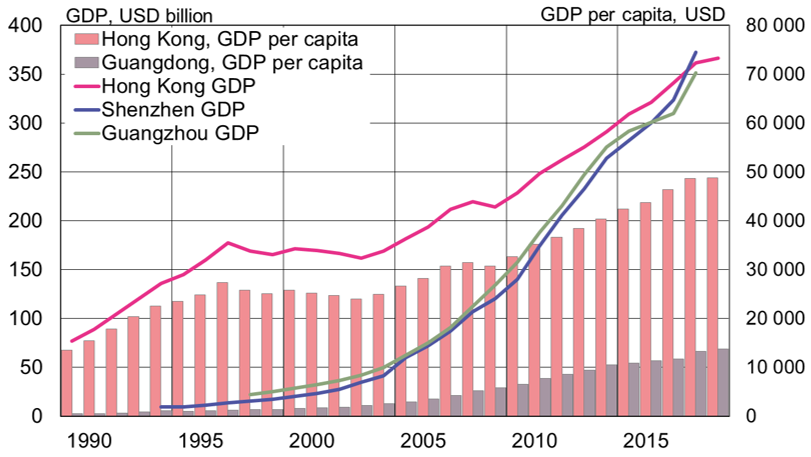