China Customs reports that the value of goods imports, measured in US dollars, fell by 16 % y-o-y in May, while exports decreased by just 3 %. As a result, China’s trade surplus hit a near-record monthly high of 63 billion dollars.

Much of the decrease in the value of imports was due to lower global commodity prices. Volume-wise, imports of many raw materials actually increased from a year earlier. For example, China imported a record amount of crude oil in May, but the cost of the oil was about 15 billion dollars less than it would have been in May 2019.

Under phase 1 of its new trade agreement with the US, China committed to a significant increase in US imports. In May, however, China continued to miss its agreed import targets as imports from the US were down by 14 % y-o-y. Imports were also lower for almost every other region as well. For example, imports from the EU-27 fell by 22 %, when Brexit is taken into account. Imports from ASEAN countries and Japan decreased by 5–6 %. The biggest percentage regional drop in imports was for Africa, which saw the value of imports down by 52 %. African countries account for a small share of Chinese trade and China’s imports from there are mostly basic commodities.

The 3 % decrease in total exports again was lower than expected. The decline was softened by exports of health care equipment and personal protective equipment (PPE), which continued to boom in May. Exports to the EU-27 were up by 15 % (Brexit-corrected), Japan by 11 % and the United States about 1 %. On the other hand, the coronavirus significantly depressed exports to India (down 51 %) and Brazil (down 26 %).

The outlook for Chinese exports have been hurt by the global economic recession. A similar story is revealed in readings of purchasing manager indices (PMIs), which suggest that new export orders are contracting rapidly. 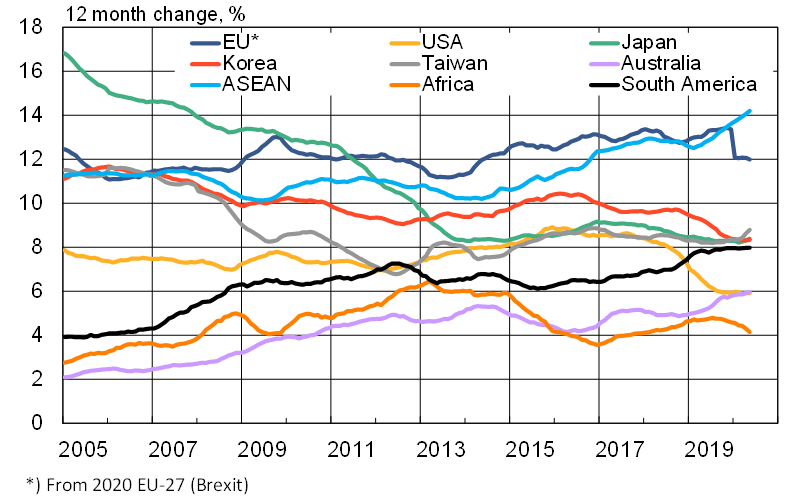