At the beginning of June, the People’s Bank of China unveiled two new programmes to alleviate the financial distress of small firms due to the coronavirus crisis. Access to new lending and repayment extensions are conditioned on borrower commitment to retaining staff. The programmes are directed to smaller regional banks, whose financial standing authorities also want to improve.

Small and medium-sized enterprises (SMEs) account for about 80 % of urban payrolls and generate close to 60 % of GDP. Even so, most SMEs find it difficult to obtain bank loans. The PBoC reports that the stock of small business loans at the end of last year amounted to just 11.6 trillion yuan or 8 % of China’s total 153 trillion yuan bank credit stock.

In the first programme, the PBoC provides zero-interest loans to smaller regional commercial banks for the purpose of financing SMEs. The arrangement involves setting up a special purpose vehicle which buys from suitable commercial banks up to 40 % of new unsecured SME loans with maturities longer than 6 months. For this programme, 400 billion yuan has been set aside with the goal of increasing lending to small businesses by 1 trillion yuan. Banks keep the interest income on the loans, but also bear all the risk of default. Commercial banks need to repurchase loans from the vehicle at the selling price at the end of a one-year period. As providing adequate collateral is a common obstacle for small businesses seeking loans in China, the programme emphasises the granting of unsecured loans. Observers make the point that commercial banks might not be interested in the programme, as the high risk of default is a reason they are so reluctant to grant loans to SMEs.

Under the second programme, 40 billion yuan has been allocated to support bank income losses resulting from extensions on small business loans. At the belated May session of the National People's Congress, premier Li Keqiang announced that small businesses could postpone repayments and interest on loans due this year until the end of March 2021. A bank is eligible to receive the equivalent of 1 % of capital of postponed loans to cover the losses. The PBoC considers any company with a credit line less than 10 million yuan (approximately 1.4 million dollars) to be a small firm.

China’s monetary policy has long been guided by various targeted actions. The economic fallout from the coronavirus epidemic has increased the range of instruments used by the PBoC. The two new programmes are small, however. Earlier this year, the PBoC launched two financing programmes worth a total of 1.8 trillion yuan (approximately 250 billion dollars) to deal with the corona epidemic and support businesses. Central bank governor Yi Gang reports that a total of 752 billion yuan under the programmes had been doled out as of end-May.

As in April, the stock of bank lending in May increased by just over 13 % y-o-y. New lending totalled 1.48 trillion yuan (210 billion dollars), which was slightly less than in March and April. Growth in the PBoC’s total financial stock accelerated to almost 13 % y-o-y as both government and corporate bond financing soared. 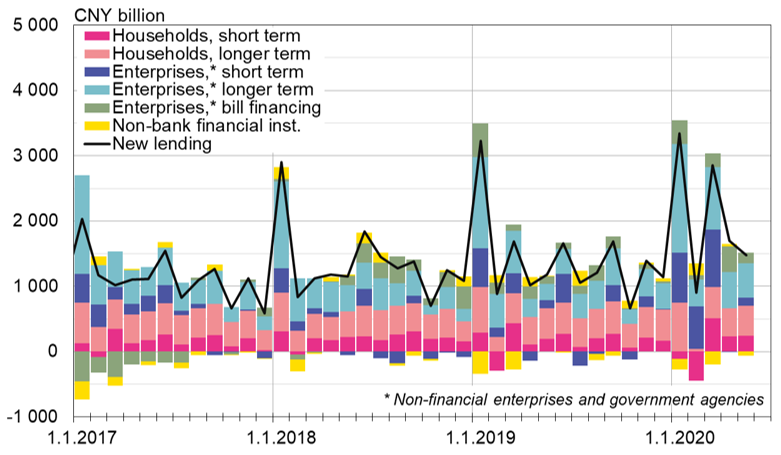