As in 2015 and 2016, federal budget revenues from the production taxes and export tariffs of the oil and gas sector have plummeted. In the first four months of this year these revenues were down by almost 20 % y-o-y. The on-year decline in April was 40 %. The revenues are closely linked to USD-denominated export prices for crude oil, petroleum products and natural gas.

The price of Urals crude was off by more than 35 % y-o-y during the first four months of this year. Oil prices collapsed in March, and the Urals cost around $18 a barrel in April which was 70­–75 % lower than in April 2019 and January this year. Although the ruble’s depreciation against the US dollar slightly dampened the oil price decline, the Urals price in rubles was still about 65 % lower in April than 12 months earlier. The situation is different from previous deep drop in oil prices in 2015, when much of the impact on federal budget revenues was softened by ruble depreciation.

In January–March, non-oil revenues to the federal budget were up by 13 % y-o-y. They rose so steeply in April that their growth in January–April exceeded 30 % y‑o‑y. The jump in April came from a huge leap (about 1 % of GDP) in a category that includes revenues from the central bank (CBR). The CBR apparently handed over virtually all of the payments planned for this year from the operating surplus that is derived from the sale of its majority ownership stake in Sberbank to the government (BOFIT Weekly 17/2020). The funds for the purchase were taken from the National Welfare Fund, the state's reserve fund. By linking the purchase of Sberbank shares to these payments from the CBR’s surplus, National Welfare Fund assets were converted into budget revenues that the government will use to finance budget spending.

Finance minister Anton Siluanov says the ministry expects this year’s federal budget revenues to shrink by a fifth from 2019 and this year’s original revenue estimate if the price of Urals oil averages $30 a barrel and GDP declines by 5 %. The loss in budget revenues amounts to roughly 4 % of GDP. Siluanov expects additional federal spending to be authorised this year and the federal budget deficit to come in at around 4 % of GDP. 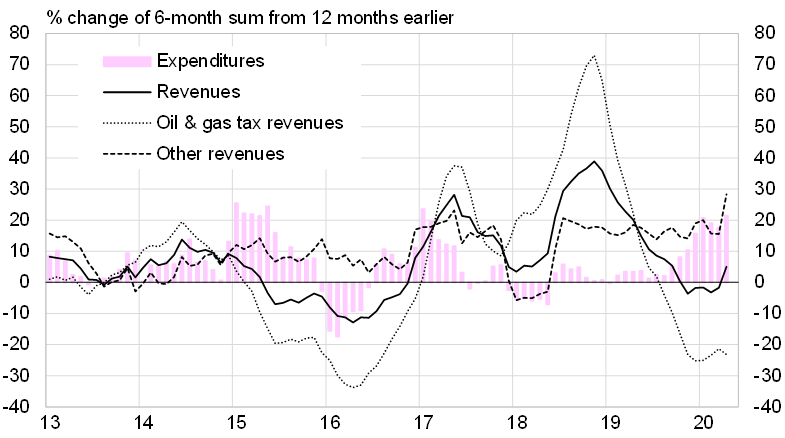