In just a month, the price of Brent crude rose from around $20 a barrel to nearly $35. The current price is now on par with levels in early March, but still about 50 % lower than at the start of the year. The price of Urals crude, Russia’s slightly heavier export grade, has also returned to early-March levels. The price difference between the traditionally slightly cheaper Urals grade and Brent blend has narrowed to almost nothing.

Prices fell sharply in March and April as COVID-19 reached pandemic status. Lockdown measures and the sudden halt in economic growth resulted in an unprecedented reduction in global oil demand. Uncertainty spiked and financial markets grew volatile. Moreover, the crisis hit when oil production was at historically high levels and there was a shortage of storage capacity in many places.

The new OPEC+ production control agreement in force since the beginning of May (BOFIT Weekly 17/2020) appears to have significantly reduced production. Saudi Arabia, for example, has announced that it will reduce its production to levels significantly below the agreement ceiling. The world’s largest crude oil producer, the United States, is expected to see a large decline in output as several major oil companies have announced production cuts. The International Energy Agency (IEA) estimates that US crude oil production will be at the end of this year 20 % below the level of end-2019.

Oil markets have buoyed in recent weeks by a slightly less gloomy outlook for global oil demand. The recovery of the Chinese economy is fitfully underway, and many countries are gradually easing restrictions to curb the spread of the coronavirus. Nevertheless, there is little reason for great optimism among oil producers. The IEA sees oil consumption declining by about 20 % in the second quarter, and by almost 10 % y-o-y for all of 2020.

Brent and Urals crude prices are having a tough year 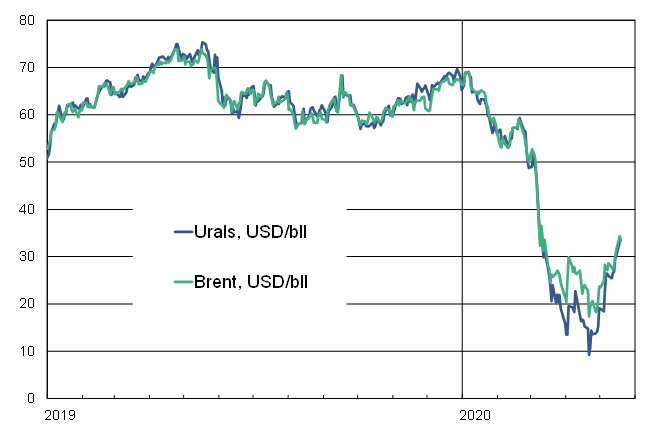