The Central Bank of Russia lowered its key rate by 50 basis points to 5.5 % on April 24. The CBR further signalled that it would consider another rate cut at its next meeting if conditions warrant. The CBR’s rate-setting decisions at recent meetings have been made challenging by countervailing inflationary pressures and exceptional levels of economic uncertainty.

Consumer inflation accelerated to 3 % y-o-y in April. The acceleration in the inflation rate reflected ruble depreciation and a retail demand spike in late March as Russians stocked up in anticipation of the lockdown. According to the research literature, a 10 % depreciation in the ruble’s exchange rate translates roughly to an increase in Russian consumer price inflation of about one percentage point within three months. In March, the nominal effective (trade-weighted) exchange rate of the ruble deteriorated by 12 %. The CBR views the recent pick-up in inflation to be fairly short-lived and expects inflation to hover near the CBR’s official 4 % inflation target both this year and next on average.

The CBR’s latest economic forecast sees Russian GDP contracting by 4–6 % this year, and rising by 3–5 % next year. The price of Urals oil is assumed to average $27 a barrel this year (i.e. an average of $20 between May and December this year) and $35 a barrel next year. The CBR expects a sharp decline in both exports and fixed investment. The volume of imports is expected to decrease slightly less than exports. The CBR forecast sees Russia’s current account surplus turning to deficit for the first time this century. 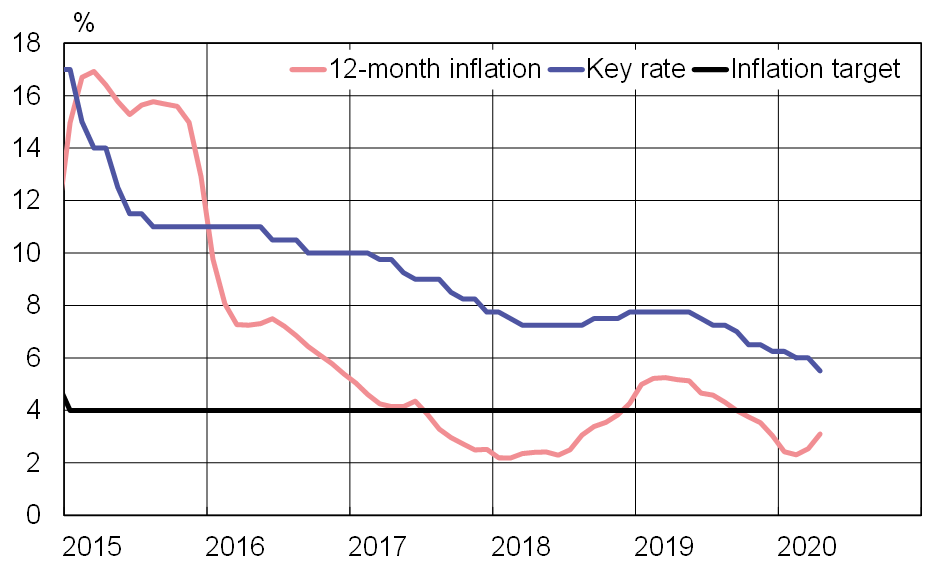