Since the start of 2019 the rise in consumer prices has slowed, mainly as a result of low economic growth and ruble appreciation. The CBR has responded to falling inflation with monetary easing. Its key rate (currently 6 %) has now been lowered six times in a row. After its February key rate meeting, the CBR signalled that it intended to maintain an accommodative monetary stance (BOFIT Weekly 7/2020).

The recent substantial drop in the ruble’s exchange rate in turbulent markets should result in higher import prices and thus somewhat accelerate inflation in the coming months. Persisting market uncertainty makes it challenging to fine-tune monetary policy. If the ruble remains weak, higher prices for imported goods likely pass through more to consumer prices, while ongoing troubles in the oil markets may further depress Russian economic growth, which would lower inflation.

Consumer price inflation is currently running below the CBR’s target of 4 % p.a.  Its forecast for this year calls for inflation in the range of 3.5−4 %. The CBR’s next regularly scheduled rate meeting will be on March 20. 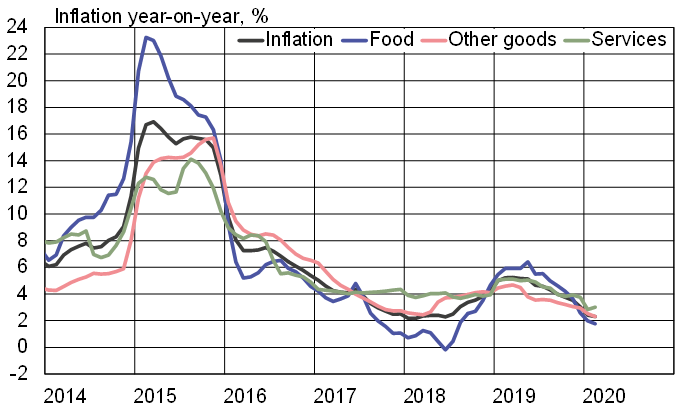